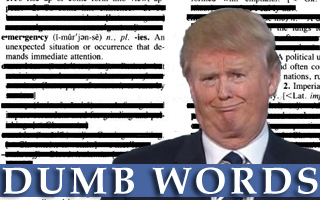 WASHINGTON, DC – One of Donald Trump’s first actions as President of the United States was sign an Executive Order reducing the total number of words in the English language to 150.
“Trump is a dumb, dumb person and as such he does not know very many words,” said White House Press Secretary, Sean Spicer.
| FULL STORY |
MORE HEADLINES