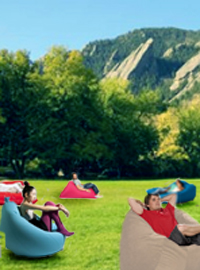 Artists rendering of park visitors in the Chill Out on a Bean Bag Town area of Mile High Funtown.
Related Topics

DENVER, CO – Thanks to the popularity and profitability of legalized pot, Colorado will soon be getting a new marijuana themed, adult amusement park named Mile High Funtown 420.

“Pot is huge in Colorado so it just makes sense to build on that popularity and open a pot-themed amusement park. And really, when you are high, the only thing you want to do is go to an amusement park. That’s a fact,” said Mile High Funtown 420 CEO, Rebecca Matthews. “I don’t smoke the pot myself, I’m strictly a coke and mushroom gal, but that’s what our market research shows – potheads love amusement parks. It also showed that potheads really love Terrence Trent Darby but… we decided not to act on that for obvious reasons. But when you think about it, how cool would a Terrence Trent Darby amusement park be? Maybe we’ll expire that possibility in Oregon.”

The new amusement park is set to open next summer and will feature a number of attractions geared towards marijuana users.

“The main, and biggest attraction will actually take up about 80% of the park and it will just be a real big area full of bean bag chairs where you can just relax and chill out for a while… high, of course. We call that attraction, Chill Out on a Bean Bag Town sponsored by Doritos,” said Mile High Funtown 420 Director of Fungineering, Connor Geertz. “I know that name seems really, oddly specific but the people enjoying our park will be really, really high so things will have to be named using words that are very clear and really easy to understand.”

“The Spinning Bong Ride is going to be nothing short of amazing,” Geertz said. “It’s going to be like the tea cup ride at Disneyland, but way better. For one, it’s going to go a lot slower. If you go too fast it’s totally going to harsh your high. The last thing you want is someone Harding your buzz. So the ride will be a gentle spin, that goes really slow. If you didn’t know you you were moving you might not know that you’re actually moving. Especially if you’re really high.”

In addition to the attractions and numerous “chill out” zones, the new amusement park will feature a variety of dining options.

“We’ll also have a number of cool dining options that are pot themed. Well, maybe not pot themed so much as we will put pot on all the food,” Matthews said. “There will be hamburgers with pot on it. Pizza with pot on it. Hotdogs with pot on it. And we are going to raise the bar when it comes to the concept of edibles. I mean there will be weed in everything, right down to the lemonade. Everyone loves lemonade and soon, after they come here they’ll love lemonade with pot in it.”

To celebrate the grand opening of the park early next year, the band Phish will play with members of the Grateful Dead and The Doors.

“Of course we are,” said one of the guys in Phish that was too high to remember his name. “You knew before you read the second paragraph of this story that (Phish was) playing at the grand opening.”

Needs Rollercoasters! How stupid to forget that most important ride of an AMUSEMENT PARK! When I’m high I always wanna ride a coaster. I want to have fun, not lay about on my already fat ass.

It’s rely not a fact. The truth is most pothead (like me) don’t relly care for parks, it’s just alot of walking and sweating and waiting. If it were possible to make an Indoor park that was air conditioned and u could give everybody golf carts or something like that it would be much better. When i get high all i relly wanna do it eight smoke sum more weed or eat sum food and just chill.

omg i love what yall is doing i smoke pot everyday