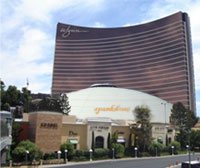 An artist's rendering of the Spankdome.
Related Topics

Although it is only in the design phase, the Spankdome is changing the face of the Las Vegas Strip as other developers are rushing to build competitive ideas.

“This idea is just so out there, that we had to steal it,” said real estate magnate Donald Trump. “But where (Wynn) will fail I will succeed. See, I’m going to everything bigger and flashier than (Wynn) could even dream of. Get this. I’m going to have solid gold posts in the floor that people can sit on to help get themselves off. Chicks, dudes, whatever. Solid gold. Have you ever had a solid gold phallus in your anus? I can tell you it’s nothing short of magical.”

The Spankdome is being designed with both women and men in mind.

While the opening of the Spankdome comes with a certain amount of risk, Wynn is confident that travelers will flock to the facility.

“We want everyone to come in here, no pun intended, and feel free to do whatever it takes to make them come again, pun intended,” Wynn said. “A lot of people have come to me and said ‘Steve, you’re crazy. No one is going to travel just to masturbate. That’s what taxi’s are for.’ Those people are right to a certain extent. But if I learned anything from my high school football playing days, it’s that jerking off is so much more exciting when there are other people around. That’s why people will come to the Spankdome. That is why men and women will come, just to watch someone else touch themselves while they touch themselves.”

While many people around the world are excited about the possibilities that come with the Spankdome, there have been some very vocal critics.

The Spankdome is scheduled to open in August of this year.

Thats is just disgusting , is anything personal , and classy anymore, not to mention- insanitary- whoever this guy is, hes disgusting!!!!

This is a great idea.
I love to watch others doing and I really enjoy putting on a show of my erection and then making it do the climax for others to get excited about..good idea..when is it open and what is the entry cost?

I can’t wait to show off my huge cock to other men’s wives and girlfriends. They will definitely wish they were with me after seeing my amazing erection shoot loads all over there faces.

That sounds so sleazy! I love it.I hope I get an invitation for the first day! I hope many women are there so I may watch while spanking my monkey!

sounds amazing. only problem is not having the choice to jerkoff with only guys.