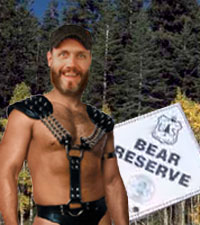 Big, gay bears will have a new home later this month when Bear Necessities opens in Mill Valley.
Related Topics

“Everyone knows that life isn’t exactly easy right now and we are seeing a very large population of bears becoming displaced due to the closing of gay bars and the growing expense of leather goods,” said founder of Bear Necessities, Jenny LaPointe. “When a bear doesn’t have a place to go they wander into suburban neighborhoods causing all sorts of problems. When animal control is called in they rarely know how to handle one of these creatures and they never take into account the bear’s safety. What we hope to do is help those bears who have been captured by animal control and get them back to healthy so we can relocate them to an area where they can be safe and thrive – downtown San Francisco. Or possibly Eugene, OR.”

As the economy went down, so did San Francisco’s ability to support the hundreds of gay bars. More than 20% of the gay bars in San Francisco have closed in recent years or changed to include more heterosexual clientele. Bear bars were hit the hardest, as they were larger and therefore more expensive to maintain.

“It’s been a rough go for bears lately, especially in San Francisco,” said Malcom Bruce, president of the National Bear Association. “Bears are typically gentle, loving creatures that just want to be left alone. They’re just like you and me, they need certain things to stay alive, and unfortunately, they haven’t been able to find those things. If they have a place to find a cub, they’re happy. That’s what the bear bars did. It provided a location. Now, without those bars, they’re lost. They don’t know what to do. I know there is the internet, but really, that’s not a very good idea. I mean I could go online and say I’m anything I want. I could say I like to give and receive when in reality, I’m nothing but a selfish top.”

Bears are generally regarded by scientists as docile and good natured but their size, hairiness and leather-clad appearance is often seen as frightening to suburban parents. San Francisco resident Stephanie Kane was recently confronted by a bear that had wandered dangerously close to her home.

“I was just sitting there having breakfast with my family when all of a sudden there was a bear out on our lawn,” said Kane. “I mean, I know that they’re always around, but it was really unsettling to see one so close. My kids started crying, thinking that (the bear) was going to come in and maul them. I had to reassure them that it was just as scared as they were. Luckily I was able to scare it off by banging pots together on the front porch. It was just a very nerve wracking situation that I would prefer never happen again.”

It was hearing about situations like this that prompted LaPointe to start Bear Necessities.

After a bear is received at Bear Necessities they will go through a short isolation period and a physical review to make sure they are not a danger to other bears or handlers.

“When a new bears comes into the facility, there are a lot of things that we want to make sure of before we assimilate them into the general population,” LaPointe said. “A lot of bears, when their on their own for a while, are very aggressive. They’ve been wandering around for who knows how long, without seeing a cub or another bear. When we bring them in, we quarantine them for two days and give them whatever materials the need to, ‘relive’ their pent up aggression. After they take care of what they need to, they usually revert to their normal, docile state. If they remain aggressive, we work with them on an individual basis.”

Local police forces have committed to working with Bear Necessities to help save the bears.

“The police have been more than helpful in these hard times,” LaPointe said. “Once word got out that we were here, the police were happy to have a place to take stray bears, because let’s face it; the last thing the police need is to have a jail cell full of bears with one lone cub. That would be a nightmare.”

Bear Necessities will be open to the public for guided tours starting in late November.