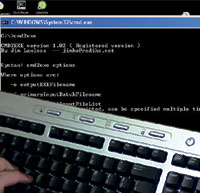 OMAHA, NE – Sitting in his cubicle, Desktop Information Technology employee Garret Cutler dreams of, and is preparing for, the day when he will be called upon to save the world with his batch file writing skills.

Batch files are text based files used by computers to execute commands. The batch file is a relatively simple form of programming and widely used by IT workers world wide.

“I’m pretty much the only IT guy in the world that can write a batch file that works,” said Cutler. “I mean, the dumb-ass users in here wouldn’t be able to get anything done without the batch file that I wrote to take the sales directory and auto-map it to the desktop. Those dumb people would get lost in the companies directory structure and I’m just sick of bailing them out every 10 minutes. I mean come on! I have more important things to do than help retards all day.”

Cutler has been practicing his batch file writing skills as often as possible in preparation for what he calls “a cataclysmic event that only I can stop with the perfect batch file.”

“There will come a day, very soon, when the world will come to a complete stand still and I will be there… to save the world,” said Cutler. “If we just let these dumb-shit users play with computers without listening to and following my explicit instructions, the shit-brained users will accidentally release a really bad virus or something and I’ll have to write a batch file in like five minutes to stop it from happening.”

Of the 23 Desktop IT staffers, employed at Myers, Inc, all but one can write batch files.

“(Cutler) is a tool,” said fellow Desktop IT employee Benjamin Rolle. “He thinks he’s the only one that can write a batch file but all of us can – except Ryan. Ryan is a dumb-ass. But I can write batch files just as good as he can, if not better. Command line functions are a piece of cake for guys like me. I once wrote a batch file to copy my entire Outlook inbox to my PDA. And that was in Windows 95! Beat that Cutler!”

According to Professor Wayne Collins, Omaha County Community College, batch files are relatively easy to create and are among the first things any student learns when taking a computer information systems course at a community college.

“For some reason, IT guys tend to think they are the only people on Earth that can write batch files, or even use computers correctly,” said Collins. “I try to discourage that thought process in my classes but it never helps. IT guys, especially the desktop slash help desk variety, are the worst of them all. None of them even graduate… which is really weird.”

Cutler has been dreaming of saving the world since he saw the film “Independence Day” in which computer programmers write a program that defeats an alien invasion.

“After I saw that movie I realized something like that could totally happen… so I started to investigate some stuff. If you look at the Windows 3.0 Users Guide, there are several clues that show us that there could be a pending disaster, just waiting for me to rescue the world from,” said Cutler. “The most glaring clue comes on page 37 where it says ‘when the vista comes, the world will curl up and expire.’ The clues don’t get any more blatant than that. I’m ready and I’ll have the perfect batch file ready to go.”

According to IT historians, there has not been a single instance of a batch file saving the world.