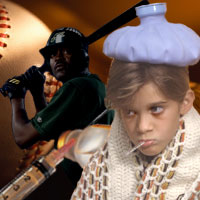 GLENN FALLS, MI – A child in the St. Michael’s Hospital Children’s Ward gave up on life last week as he learned that his favorite baseball player, Roger Clemens, had been identified in the Mitchell Report as someone who may have used performance enhancing drugs.

Little Steven Celric, told his family “good bye” and died shortly after watching an ESPN special about the Mitchell report.

The Mitchell report was organized and delivered by George J. Mitchell, a former United States Senator and focused on the use of steroids and human growth hormone in Major League Baseball. Clemens was one of 86 current and former players listed as using either steroids or human growth hormone.

“It’s just a shame, really,” said Dave Berrish, Steven’s doctor. “I mean, he just gave up. He looked up to Clemens, and this is how it ends? That is one fucked up thing to do to a kid. Speaking professionally, this is completely Clemens fault. I mean (Steven) wasn’t going to die any time soon. Sure, maybe in a few years, but not today. No, Clemens lied to the world and he lied to this poor little kid. Now that kid is dead. I hope (Clemens) can live with himself. That lying bastard.”

Steven Celric, who suffered from a rare but typically not life-threatening form of tonsillitis, proclaimed himself to be one of Clemens’ biggest fans.

At one point last season, Clemens visited Celric in the hospital where the baseball player promised young Steven that he would strike out 10 players.

“Do you know what kind of pressure shit like that puts on a guy?” said Clemens. “Every single one of us baseball players visits sick kids in the hospital and every single sick kid makes us promise to do something just for them. My first year in the majors three kids died because I didn’t strike out enough people or I didn’t win enough games. The whole steroid problem comes down to these little fuckin’ sick kids. If it wasn’t for them, none of us would need steroids. Not that I’ve ever done steroids.”

According to MLB statisticians, 200 to 300 professional baseball players make promises to sick kids in hospitals each year. Of those promises, only 10 are kept.

“Forget steroids, the biggest threat to Major League Baseball is sick kids,” said MLB Players Association spokesman Cory Salvatore. “Seriously. If we could just get rid of all the sick kids out there, players wouldn’t need steroids or speed… I mean what? Who said anything about speed? I don’t know anyone on speed… or steroids.”

Since the release of the Mitchell Report, Clemens has repeatedly denied the use of any performance enhancing substances, despite evidence to the contrary detailed in the Mitchell report.

“He should just come out and admit it, I mean, come on, we all know (Clemens used steroids),” said Lori Celric, Steven’s mother. “Steven knew it was true, that’s why he just gave up. Now he’s dead. I hope Mr. Clemens is happy. I mean this is almost as bad as when that kid died after the Bears promised a Super Bowl win. But that kid was totally screwed, he had a tumor the size of a watermelon. My little Stevie was relatively healthy when he died.”

MLB will reportedly look into the influence of sick kids on the game and former senator Ben Nighthorse Campbell has been tapped to prepare a report on the findings.