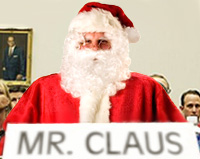 WASHINGTON, D.C. – In another bailout request, Santa Claus appeared before Congress this week asking for $45 billion in order to continue operations and ensure “Christmas happens as it should.”

Hit hard by the sagging economy, Claus said he does not have enough capital to meet the holiday season’s demand; therefore, putting his ability to deliver toys around the world on Christmas Eve in jeopardy

“A number of circumstances have made it impossible for me to continue operations,” said Claus. “My services have never produced a strong profit with the high overhead of providing for a workforce of 3,000 elves. (Profit) is difficult when your only source of income is selling used elf cloths to thrift stores and licensing out my likeness. And of course there are the executive salaries. But those are completely reasonable so I’m not even sure why I brought that up. It’s having to pay insurance on 3,000 health risks. Not everyone realizes this, but elves are really unhealthy. I guess it comes for the generations of inbreeding, but there’s really nothing I can do about that now.”

Claus has reported a significant loss of $50 billion over the three years. According to Claus, a rise in fuel costs, raw materials and changes in regulations have all contributed to his losses.

“There is a common misconception, primarily from holiday specials, that my craft is powered by flying reindeer. That is incorrect,” said Claus. “No offense, but that is ridiculous. Retarded even. In order to make it around the world in one night, except of course the Muslim countries, I have to be packing some serious power. Let me put it in a way that you all will understand. The same engines that power a stealth bomber power my sled. And do you think the fuel that runs that is cheep? No, it’s not! It was much cheaper when I was getting it on the black market from the Iranians, but ever since the CIA stepped in and put a stop to that, I’ve been paying a premium.”

After his speech, several congressmen had questions for Claus’ including questioning him on his arrival in the jet powered “super-jet-sleigh.”

“To me, (the sleigh) looks like a WMD,” said Bill Young ® from Florida’s 10th district. “And I’m a little put off by that beard too? This here fella looks like one of those damn dirty Muslim insurgent terrorists. He looks like he’ll come right over to your house and drop an A-Bomb down your chimney. Then he’d laugh and do something vile with your mothers burning corpse. Hell, probably your father’s burning corpse as well. Yup, that’s what terrorists do.”

Claus outlined his plan for spending the $45 billion which included paying off debt, buying fuel and covering executive salaries and bonuses.

“First thing I’m going to do with this money is gather all of my top brass, go somewhere and have a meeting to discuss how we’re going to divvy up this money,” Claus said. “I hear that Aruba is nice this time of year. But honestly, anywhere is going to be nicer than the North Pole. Where ever we go, we will not leave until we hammer out where this money will go. I don’t care if it takes two days or two years, we will suffer through and come out this on top.”

Congress is skeptical of Claus plan as many of them have a hard time seeing a return on the investment.

“This whole thing sounds funny to me,” said Michigan Senator, Carl Levin. “He sat there for three hours telling us he doesn’t make any money, he pays his executives enormous salaries and treats his workers like indentured servants. If we give him this loan, how will he pay us back? I’m not sure he realizes that is part of the deal. But then again, he really doesn’t represent anything different then the auto industry.”