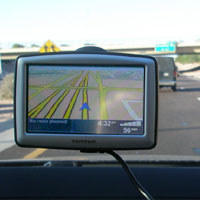 Tom Tom will now allow customers to install the voice of their spouse.
Related Topics

AMSTERDAM, NETHERLANDS – Tom Tom has unveiled a new feature to its voice guided GPS navigation system that will allow customers to load the voice of their spouse into the device to make for a more “familiar” driving experience.

This new service will be called Voice Voice and will be available in the next generation of Tom Tom GPS navigation devices beginning early next year.

“Many customers spend so much time away from their house and on the road and with this new feature we are hoping to make that time away like they are not away and like their spouse is sitting right next to them,” said Tom Tom CEO Harold Goddijn. “Now our customers can hear their wives yelling at them to turn all of the time, even when their wives are not in the car. How good is that for men?”

In January, all new Tom Tom GPS navigation devices will come with the Voice Voice service that will allow for customers to record the voices of their loved ones that can then be loaded into the Tom Tom for the turn-by-turn voice directions.

“From the very beginning of car based GPS devices, this has been a dream, but only recently have we been able to crack the fifth dimension and figure out how to do it,” said Tom Tom Lead Software Engineer Natias Holdstrum. “Each new device will come with a very short script for people to read so they know what to say. But the best part is you don’t need to stick to the script. The important thing is that people record themselves or their wives how they are all of the time. So not using the script is ok.”

While many GPS navigation systems allow customers to choose a variety of voice tracks, Tom Tom is the first to provide a method for installing home-made voice tracks.

“This is just the natural evolution of GPS devices,” Goddijn said. “I can not count the number of times that I’ve been on a business trip and have thought to myself ‘I wish my wife was here telling me where to turn, or that I am not paying attention like I should or that she has to go to the bathroom.’ Why do all women have to go to the bathroom all the time? Have you noticed that? It’s not just the Dutch. It’s all women! It’s like they have a bladder the size of a walnut. But that is not the point. The point is that thinking like that made us look into developing this new feature.”

The company is hoping that customers have a strong desire to hear the voice of their spouse while traveling.

“The important thing here is for who ever is going to be recording, they must be themselves,” said Goddijn. “Otherwise you might as well just use the stock voices. So when recording, we recommend that the person speaking use all the same sarcasm, passive aggressive language and condescending tone that they would if they were actually in the car. My wife has created a training video. It is very good. She is very good at nagging.”

While Tom Tom is excited about the new product and features, many electronics industry insiders are skeptical about the ultimate success of the Voice Voice.

“Holy god. If I had to listen to my wife yell at me, even when she wasn’t in the car I’d fucking shoot myself,” said former Wired GPS critic Gene Plekanec. “I can think of no hell worse than that. Why would Tom Tom do this? Who wants this? I bet only that annoying couple three doors down buy it. You know who I’m talking about. The couple that’s been married for like 10 years but still holds hands everywhere they go and do that annoying Eskimo kiss? Fuck those guys. Those guys need to die. I hope their Tom Tom drives them off a cliff”