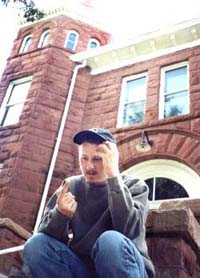 TEMPE, AZ – The world of Philosophy was turned on end last month as Arizona State University student Kip Stegman released the most complete and modern theory as to the meaning of life. Stegman’s theory states simply that the meaning of life is to simply “not die.”

Stegman, who has no formal Philosophy education, says the theory “just came to him” during a party at his Fraternity. According to witnesses of the event, Stegman’s epiphany occurred at the Sigma Nu fraternity house after consuming 4 beers and two marijuana cigarettes.

“He came bustin’ out of the Hookah Room almost totally naked and shit, and he was actin’ crazy, yelling and screaming that he had figured it all out. He was sayin’ some crazy shit like he knew why we are all here and then he up and ran out the front door and across to the Philosophy building,” said fellow student and fraternity member Shawn Davis.

Stegman formalized his theory moments later by spray painting “the Meaning of Life is – Not Die” on the South wall of the Philosophy building. At the time, Stegmen says, he had no idea what he was about to give the world.

“I wasn’t a…uh…Philosophy major before but since my revelation, I have atruni…ah…cated the conclusion that maybe Philosophy is where I belong. Philosophy is my… memorandum,” Stegman said. “I totally hate having to drop my Speech Communication major but, weird shit like this doesn’t happen to people all the time, I guess I’m one of the lucky ones. Pentancerous if you will. I want to work on my theory and make it easy for everyone to understand. And let me just add one more thing – famous philosophers, they get all the pussy. Yeah, give it up!”

While laymen have looked down upon Stegman’s theories, the Philosophy world has embraced them with open arms.

“This boy is quite the genius, I must say,” said Martain Gellianas, Professor of Philosophy at Yale. “A genius of the purest breed. If I took Albert Einstein, Sigmund Freud, and that guy that won on ‘Who Wants To Be a Millionaire?’ blended them all up and injected them into the uterus of a pregnant woman while she calls me ‘daddy,’ you wouldn’t get a baby half as smart as this exceptional young man is. I am eagerly anticipating his research and I hope that the rumor is true that he will delight us with his theory on free will at this years convention.”

“Right now it’s all about me and my brain. I am gunna become the biggest philosopher since Play-dough,” Stegman said.