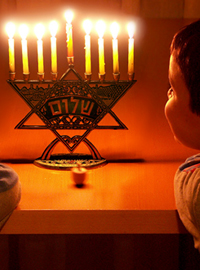 Local Christian child Bradly Mickleson wishes he was Jewish so he could celebrate Hanukah.
Related Topics

QUEENS, NY – Local 11-year-old Christian, Bradly Mickleson, wishes he was Jewish so he could celebrate Hanukah and receive gifts for eight consecutive days.

“If I was Jewish I would get presents for eight nights instead of just getting presents on Christmas day… and Christmas Eve,” said Bradly Mickleson. “It’s not fair! I want to be Jewish so bad! Being Christian at Christmas sucks when you look at how much better Jews celebrate Christmas. It’s not fair!”

Late last week Bradly Mickleson asked his parents if they would consider converting to Judaism.

“Bradly came to us as we were watching ‘CSI’ and asked us if we could change to be Jewish,” said Bradly’s father Jermaine Mickleson. “I laughed about it and told him no but he just stood there. Then he asked again and when I told him ‘no, son. We are Christian and it’s just not that simple’ he stormed off. He hasn’t talked to us since. I didn’t realize gifts meant that much to him. Maybe he thinks that with more days there is a greater chance of getting a new Xbox. If he does, then he’s stupid, because there is no way I’m buying him one of those pieces of shit. Now if he wanted a PS4, then that is something to get worked up about.”

When his parents rejected the idea, Bradly Mickleson allegedly became hostile and threatened to run away.

Unable to convince his parents to change religions, Bradly Mickleson has approached several Jews in his neighborhood and inquired about converting himself.

“Young Bradly came up to me just the other day and inquired about the conversion process, but I told the young shaygets, it’s a very serious matter and he needs to discuss it with his mother,” said Mickleson neighbor and Jew Gabe Shevitz “It’s just a phase. Young boys have some much greed in their hearts at that age. They want everything. Someday, when his parents teach him the meaning of value, he’ll understand how foolish he is being. And if he grows up and still wants to be a serious Jew, well, we’ll start the conversion process by draining all his blood and replacing it with…. Oh, maybe I shouldn’t tell you that part. Nevermind.”

Mickleson’s parents speculate that the 11-year-old’s desire to be Jewish stems from a close relationship with several Jewish neighbors.

“There are a lot of Jewish families in this neighborhood so I’m not really that surprised that Bradly wants to be Jewish all of a sudden. We’ll see what he has to say when Passover comes around,” said Jermaine Mickleson.

Mickleson’s Jewish friends are surprised and confused as to why Mickleson would want to convert to Judaism noting that on Christmas Day Mickleson receives many more gifts than the typical Jewish child receives during Hanukah.

“Being Jewish isn’t all that great,” said Mickleson neighbor Herschel Mendel. “I wish I was Christian. They have all the awesome holidays! Like that zombie Jesus one? Easter I think. How cool is it that they worship a zombie? I wish I worshiped a zombie.”