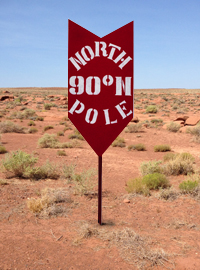 Due to global warming, Inuit people are finding themselves in need of new words to describe "hot."
Related Topics

“This is completely new thing for us,” said Inuit Elder Ma’hai Kunik. “We never needed a word for the not cold because it doesn’t get not cold here. So it is weird and difficult. We have words for fire and cooking and what you feel when you rub a penis and vagina together, but we had nothing for the concept of not cold as related to weather. Now, with global warming, we’re having to change things about our language that we never thought we would have to change.”

So far, Inuit language experts have created 21 words that describe various types of heat. Many of the new words are contractions formed from existing words for cold with the prefix “not” added.

“It may seem lazy but you come up with more than 40 words for ‘hot’,” said Inuit historian Johnathan Cheenook. “We came up with 10 brand new words like ‘knutick,’ ‘nennoonannukkanak,’ ‘cheechoonikonnikoo’ and ‘hutinchoonikinannoowaninnooik,” That last one is my favorite. It means ‘kinda warm and a little humid but not too humid.’ It took us five months to get 10 words. So after we got to 10 words we just started add ‘not’ on to the words we already had for cold and snow. We are at 21 words now and we can hopefully get the rest we need before summer. Summer… shit, we need a word for ‘summer.’”

In recent years Inuit people have stopped using almost all words that described snow, spurring tribal leaders to gather to discuss a change in language.

“As times change and new generations come about, every language has to change and add new words and phrases,” said Harvard Linguist Reginald Whalay. “Just look at the English language. Fifteen years ago, before the first iPod’s came out, the word iPod didn’t exist. Of course this is an example of a brand name taking over, but still, the term iPod has become synonymous with a pocket music player. We’re constantly having to come up with new phrases and words to go along with our changing world, so it is no surprise that these indigenous peoples are finding themselves in a situation where they need new words because the world around them is changing. Next thing you know they’ll not only have 50 words for heat, but they’ll also have a word for punching a Transsexual prostitute in the taint while climaxing. I came up with one for the English language. I call that “getting Whalay’d.””

According to The National Oceanic and Atmospheric Administration’s National Climate Center, last year was the hottest years on record with an increase of 1.24°F over the average global temperature since 1880.

“We do not actually have 50 words for snow. That is a lie,” said Cheenook. “We only have 43. But English has a lot of stupid things in it too so shut up. But now, all of those words are going away because we don’t get much snow anymore. On my way in to work today is was downright nennoonannukkanak out there. They say tomorrow will be even more kinnoonikanuickoo. Sure, I know a lot of Republicans are quick to say that global warming is a joke when they see all the snow and ice covering the ground, but in reality, it hasn’t actually snowed here in about a year. All of this? This shit has been here for years. I hope that it doesn’t get so knutick that the ice melts and a certain ‘mistake’ that I made back in 89 pops up.”

Once work on the language has changed, Inuit leaders say they will then take a look at teaching people how to make sandcastles and bikinis.

“First thing we need to work on language, after that, we will work on the lifestyles,” said Kunik. “I’m looking forward to first swimsuit season and all of the sexy walrus sunbathing on the sand. I can’t wait to go over to them and oil them up so they don’t get sunburns. That will be nonannuckiniwanohoo in more ways than one. I could maybe look at some of the women, but first I will get me a little ‘Rus vagina.”