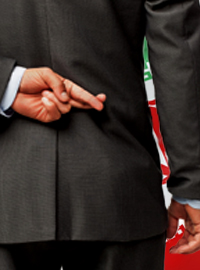 Iran has promised it is taking the nuclear agreement seriously despite giggles and smirks made by Iranian officials as the agreement was signed.
Related Topics

TEHRAN, IRAN – The leaders of Iran have told US representatives that the snickers and smirks made by Iran officials during the signing of the nuclear agreement are part of an Iranian custom and not an indication that Iran will not adhere to the agreement.

“No, no, no. The smirk and… giggles as you call them, they were not made because we have no intention of meeting any of these agreements. The giggles are an old custom of the Iranian people,” said Iran Nuclear Delegate, Masoud Fehrmanni. “In Iran it is customary to laugh at the person who is signing an agreement with you. It’s also customary to turn to your friends and say ‘they are buying it.’ See, I am laughing at you now. Not because I am being lying but because I think we can be… hehe… friends.”

Iran officials also commented on the fact that all Iranians who signed the agreement had one hand held behind their back with fingers crossed.

“In Iran fingers crossed behind the back is to mean ‘solidarity’ and ‘friendship’,” said Fehrmanni. “Hehe… yes, that is definitely what it means. Fingers crossed means ‘friendship’ and… whatever else I just said. It does not mean that we already have enough enriched uranium for 25 warheads. Hehe. And by the way, it is also a custom here to call people ‘fucking idiots’ so when you hear me call you that in a couple minutes I mean that it was a pleasure to talk to you, you fucking idiots.”

In an attempt to reassure the world that they are taking the issue seriously, Iran has released a number of videotaped statements from government officials promising to abide by the agreement.

“We will… hehe… honor the nuclear agreement… hehe… between Iran and International Atomic Energy Agency,” said Iran President, Hassan Rouhani. “We will not make bombs… hehe… no, I can’t do it, I’m cracking up too much. Abdul, stop the tape, stop the tape. Oh Allah, I thought I was going to be able to get through this. Breathe. Breathe. Ok Abdul, let’s start again from the top. We’re live? Haha! In Iran is all big joke. Not the agreement. The playing that were recording. Is just to lighten the mood because we are all so serious. You know, jokes.”

Some US officials are skeptical about Iran’s justification for the snickering and smirking during the agreement process.

“You know, it seems to me that a lot of what they are saying isn’t necessarily the truth,” said New Jersey Governor Chris Christie. “This seems like how people would talk to me when I was a lot heavier. I mean they would tell me I looked good and that I didn’t look like a bloated sausage that had been left out in the sun too long. But there would always be that little smirk when they said it. I know my wife still lived me but still, I always wondered if she was just blowing smoke up my ass. This feels the same.”

Some US officials have pointed out the snickering has continued and occurs every time an Iranian mentions the agreement.

“It just seems to be their way, so I’m sure they’ll stick with their agreement,” said Peter Rodman, R, Colorado. “I mean they’re just friendly people who love to have a good time, we can’t be suspicious of everyone who giggles all the time. If we were, we would have executed Jimmy Fallon a long time ago.”