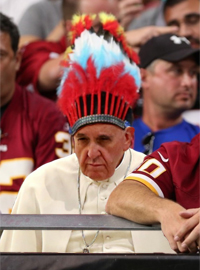 WASHINGTON, DC – During his historic visit to the United States of America last month, the Pope was unable to meet one of his primary goals of the trip – see a football game in all 30 NFL stadiums.

The distance between the stadiums and the fact that most games are played on Sunday contributed to the Pope not reaching his goal.

“Much like God, I am a fan of the American football,” Pope Francis said. “When I decided that I needed to come to America to visit you heathens, I thought I would kill two cardinals with one stone. Get it? You get my joke? See the saying is two birds. And a cardinal is a bird. And the guys who follow me around are cardinals. Get it? And also there is a football team called the Cardinals. It’s funny on many levels. Jesus would think it is funny. I know Jesus. We are good friends. As I was saying, I wanted to visit every football stadium. Unfortunately there are too many people getting gay married that I was not fully able to enjoy my visit to the US.”

During the trip, The Pope was only able to see a game at FedExField in Washington DC between the Washington Redskins and the Denver Broncos. While only seeing the one game was a major disappointment, it did give the Pope the opportunity to see his Fantasy Football quarterback play.

“That Peyton Manning is on good player,” the Pope said. “Last year he single handedly won me my (fantasy football) league. This year he is off to a rough start, but I think he will bounce back. You know who else I think will bounce back? Ray Rice. Yes, he punched his girlfriend. Yes, he knocked her out cold. Yes, he is a piece of feces that will likely rot in hell for all of eternity. But did you see the numbers that he put up last year? I think, no, I know he will be back on a team soon. I know a guy who can take care of these things. The same guy that got rid of (Tim) Tebow for good.”

According to the Pope, he was looking forward to seeing a game in all the NFL stadiums so he could “really experience America and also see the cheerleaders.”

“Now I know what a lot of people are going to say, but there is a very good reason why I want to meet with the cheerleaders,” the Pope said. “A lot of cheerleaders are women of, let us call it ‘low moral codes.’ I think that if I were to go talk to each one, privately, one on one, I could really do some good in these young women’s lives. Especially if I meet with them in the locker room while they’re getting ready. Not because I want to see them naked, no. Ew. No, I just figure that I do not want to make them late to cheer, or whatever else they do.”

Shortly after arriving in the U.S., the Pope asked President Obama about scheduling meetings and events around football games.

“We tried everything in our power to help the Pope fulfill his dream, but Roger Goodell is an asshole and would not permit the moving of games to fit in with the Popes itinerary,” a White House Report stated. “Perhaps next year when Mr. Goodell is no longer the NFL Commissioner, we can help fulfill the Popes dreams.”