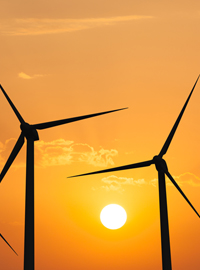 According to a recent report by the EPA, renewable energy such as wind and solar power cause over 100,000 illnesses.
Related Topics

WASHINGTON, D.C. – The Environmental Protection Agency has released a new study that concludes renewable energy, specifically solar and wind generated power, can cause up to 104,412 illnesses.

“(The EPA) just published a ground breaking report that clearly shows that the renewable energy that the Democrats have been pushing on us for so long is actually the cause of almost every illness that’s out there,” said EPA spokesman Frank Servees. “All the diseases that you don’t want to get… they are all caused by so called renewable power. Yup. The flu, gonorrhea, erectile dysfunction, AIDS, all the cancers. Solar and wind cause all of those. Yup, it’s a fact. Can’t dispute it. There’s even speculation that renewable energy is responsible for all of the people who are now allergic to gluten.”

The study, conducted over an afternoon last week, was supervised by EPA Director Scott Pruitt and marks the first major environmental study conducted under the Trump Administration.

“This study is all very scientific with all sorts of science things in there that we did to get a real science result” said Pruitt. “We used science and talked to all kinds of people and looked at number of sick people and then we put that all in to a spreadsheet and when we added up all the columns using scientific formulas we saw that every disease that people could name was occurring in the exact same places where solar and wind energy are used. The data is indisputable. Also, the same data set shows that the Trump inauguration was the biggest one that’s every occurred and was way bigger than Obama’s (inauguration crowd). I almost forgot that I have to mention that in every study. Phew. I could have lost my job if I forgot!”

According to the study, renewable energy is “the most dangerous thing ever, like, by a lot.”

The study states “wind and solar energies are derived in very dangerous and really bad methods that pulls healthy cells out of otherwise healthy humans and replaces them with cells that have diseases. Thus, vis-a-vie, and therefore, when a person living near a thing that is making wind or solar power they are hereby made sick with things like brain cancers, mesothelioma, diabetes, homosexuality, and erectile dysfunction. In scientific conclusion, people should only use coal and gasoline power because renewable energies will kill every human being within 100 miles.”

The study contradicts almost every study conducted over the last 30 years.

“For years, the democrats told us that renewable energy was healthy and that coal and gasoline was not. Well, now who’s laughing?” said Pruitt. “The democrats were trying to kill us with their solar power. They tried to take away coal jobs and now we have proof that coal doesn’t kill and solar does so that’s what we know now. Also, it’s been an absolutely amazing experience working for the… sorry I can’t read this word… pre-no-min-al, yes, phenomenal president Trump who is the best president I’ve ever worked for ever. Definitely the best. Hail Trump!”

Some scientists have come out against the report saying that the study was not conducted using the scientific method and that the data appears to be “completely fictional”.

“This report from the EPA is not science. It is not anything remotely close to science. It wasn’t written by anyone with any bit of scientific understanding, let alone an understanding of the English language,” said Massachusetts Institute of Technology Physics professor, Taline Crajakic. “You know what? Fuck it. We are all gonna die with these assholes in charge so it doesn’t matter. Just enjoy the two, maybe three years we have left.”

According to an EPA press release, the agency will release another study in the coming weeks that concludes coal power makes men stronger, women more beautiful and fertile and cures all forms of cancer in white men.