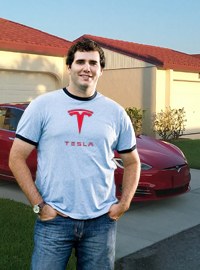 Jacob Gregory has successfully mentioned that he owns a Tesla in every conversation he's had since purchasing a Tesla.
Related Topics

SAN FRANCISCO, CA – Local Tesla owner, Jacob Gregory, has successfully worked the fact that he owns a Tesla into every conversation he’s had since purchasing the vehicle in late 2020.

“It hasn’t been easy – kinda like trying to find a Tesla charging station for my Tesla – but I’ve been able to let people know, subtly of course, that I have a Tesla every time I talk to someone,” said Gregory. “It’s been especially hard during short conversations like at checkout lines and stuff. You know, I gotta say things like ‘geez, I sure hope I was shopped long enough for my Tesla to charge.’ Or something along those lines. But it’s been a couple of months now and I’m trying to come up with new things so I’m not sounding like a broken record.”

Within minutes of purchasing this Tesla Gregory began bringing up the fact that he owned a Tesla in all conversations, starting with an encounter at an In-N-Out burger drive-through.

“Oh, it was perfect, I was there in the drive-though and when the kid came on to take my order I couldn’t figure out how to turn the radio down in my new Tesla,” said Gregory. “So I had to let the kid know that was why I was having a hard time hearing him. I mean, in reality, I probably should have known how to turn the radio down, because I’m not that much of an idiot. I turned it up after all, so it would only make sense that I would naturally be able to turn it down. But in that moment, I really forgot everything that I knew… other than the fact that I had just bought a new Tesla.”

Friends and family of Gregory have been patient and understanding of Gregory and his need to tell people that he owns a Tesla but there is growing concern that he may not stop any time soon.

“It’s kind of like the whole Vegan stereotype,” said Gregory’s sister, Rachael Donvers. “We all know that vegans have to tell everyone they meet that they’re vegan, and this is the same thing. But honestly, I think the Tesla thing is a little more annoying. Vegans are really just letting people know so that they aren’t accidently served meat. Tesla owners feel the need to tell everyone they own a Tesla because they’re assholes.”

Gregory’s need to bring up his Tesla is not unique. According to recent surveys of family members of Tesla owners, 70% said that the Tesla owners mention their Tesla at least 10 times a day.

“It’s clear from the data that people who buy Teslas are the type of people that will want to make sure everyone knows that they own a Tesla,” said Sanford Psychology Instructor, Bruce Bennet. “Their brains are just wired differently. I really don’t know how to say it. It’s like when the Prius came, only that was actually a decent car. I can only imagine what changes happen in a Tesla owners’ brain. I think it would be along the same lines as doing meth every day for 30 years. And don’t even get me started on the whole Elon Musk hero worship stuff. That is a whole other thing that we will need to have a serious conversation about as a people.”

Tesla, Inc., Media Relations Director, Steve Stark, says that Tesla buyers are passionate and are eager to talk about their Tesla.

“Can you really blame them?” said Stark. “I can tell you, because I own a Tesla as well, that these are just fantastic cars. And I’m not just saying that because they pay me. No, when I bought my Tesla, it was almost like I was being given a gift from God, but only better because last time I checked God can’t drive me to my girlfriends house to have crazy coked up sex.”