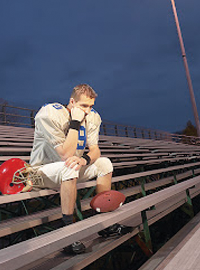 According to data published by the Centers for Disease Control and Prevention, both depression and suicide has been rising among males since 2000.
Related Topics

“Mental health is fuckin’ important, bro!” said NFL Charities Spokesman, Ray Lewis. “And we want to do our part to make sure bros are taking care of their brains and shit so we started this fuckin’ campaign here call ‘Don’t Be a Pussy’ aimed at tellin’ bros that they shouldn’t be pussies and that they should, like, call a doctor or some shit if they are feeling sad. So to all you men out there, don’t be a Pussy!”

The NFL Marketing Department says the new campaign slogan is a result of combining “manliness” with “being in touch with your feelings, you know, like a chick.”

“Real men aren’t pussies, right? I mean they don’t have pussies so then men shouldn’t be pussies when they are feeling sad! Genius, right?” said NFL Marketing Manager, Harlan Onswat. “So if a bro is feelin’ sad he should not be a pussy and do something about it. You know what I do when I feel sad? I remember all the bitches that I’ve banged in my life and you know what? I ain’t sad no more. I especially like thinking about this one chick, I think her name was Diane or some shit. Anyway, her name isn’t important but I can tell you that chick was a phreak! She did things to me that I ain’t never had done. How the hell you gonna be sad thinking about that?”

According to data published by the Centers for Disease Control and Prevention, both depression and suicide has been rising among males since 2000.

“There are dudes out there feelin’ real sad and shit, bro!” said Arizona Cardinal Running Back, Derrik Vontage. “So if you are a dude and you are feelin’ sad, don’t be a pussy and get help! You know what I mean? Like, I get sad sometimes when I fumble or I get to a new town and our equipment guy forgets to line up some road tang. And when I feel sad I just think to myself ‘bro! don’t be a pussy!’ and then I call my agent and tell him I’m sad and then he tells me I’m the best and I feel better. It’s that fuckin’ easy, bro! So don’t be a pussy! Call your agent when you are sad.”

While health professionals praise the NFL for taking mental health seriously and promoting good mental health, some have questioned the NFL’s choice in messaging.

“Look, anything that promotes good mental health is a very good thing but… I wonder about the messaging the NFL is using,” said Doctor of Behavioral Science at John Hopkins, Dennis Rhapson. “Telling someone ‘don’t be a pussy’ kinda makes it sound like they are suggesting that people don’t get help. So in that sense it is very wrong. And I understand that they are trying to use tough language to appeal to men that consider themselves as tough but… I’m not sure telling someone to not be a pussy is going to actually do what they are hoping it will do.”

The NFL is planning on rolling out the new program this winter.

“People always get mad crazy sad around the holiday’s so, you know, what better time to get out there and tell them to not be a pussy?” said Lewis.