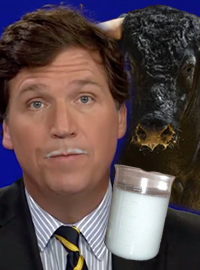 “White, American men are suffering. Suffering from low testosterone. But there is a way to fix that – bull semen,” said Carlson. “Why aren’t doctors talking about this? Wouldn’t you think that something as important as low testosterone in white men would get doctors and scientist to do something? But none of those so-called experts are. But I am. And I can tell you, from experience, that if you drink semen, specifically bull semen, you will see rise in testosterone levels. No one is talking about that. Don’t you think they should?”

Carlson says that while he did not consult doctors or hormone specialists, he did do his own research to identify ways to increase testosterone levels.

“If there is anything that we’ve learned over the last couple years it’s that doctors can’t be trusted,” said Carlson. “So why would we trust them about something so important, so crucial to America as low testosterone in white, American men? Shouldn’t we do our own research? I did. I did my own research and after drinking several different types of semen, I can tell you that bull semen is the way to go. Why aren’t doctors giving us this information? Why aren’t so-called scientists studying bull semen? Don’t you think they should?”

“Low testosterone in white American men is the biggest health crisis this world has ever seen,” said Carlson. “Yet so-called doctors just keep trying to tell us that COVID is a threat. COVID? How many people has that even killed? Millions? So what? Low testosterone could impact every single American white male. All 700 billion of them. Aside from the dangers of Critical Race Theory, this is the number one threat to White American Males.”

According to Carlson, bull semen offers the greatest increase in testosterone levels but semen from other animals may also provide benefits.

“When I started looking into this, I thought to myself ‘what is the purpose of testosterone?’ Well, that’s easy. It’s for making men look really good so they can impregnate females,” said Carlson. “And what do super fit, strong, powerful, sweaty men use to impregnate females? Semen. Obviously, testosterone and semen are connected. So, I began testing semen starting with the manliest men I could find. But drinking the semen of manly, white men, even though they look very strong and… wonderful… they are suffering from low testosterone, so my own testosterone levels didn’t rise after drinking their semen. No matter how much I drank. So, then I made a list of the most macho animals and went through them one-by-one. And when I got to bulls… that’s when I saw the testosterone levels really start to rise.”

The science community at large has not condemned nor supported Carlson’s statements.

“Well… the people that listen to that dipshit (Carlson)… if they are dumb enough to just start drinking bull semen because someone on TV… you know what? Whatever. Do whatever you want,” said Dean of Biological Sciences at Harvard University, Wilson Martz. “If you want to drink bull semen, have at it. It isn’t going to kill you so… whatever. Have fun. Chug it down like a drunk college chick at a frat party. Get yourself a beer bong and go to town. I don’t care anymore. There is literally nothing I could say to stop you from doing it so… go ahead.”

Acknowledging that some men may find it difficult to drink large amounts of bull semen, Carlson offered alternatives to getting the bull semen into the body.

“In my research drinking semen offers the highest increase in testosterone levels but rubbing in on the skin does offer some benefit,” said Carlson. “And of course, you can always take it in the rectum. That’s my preferred method, but however you need to get it in you, just get it in you.”