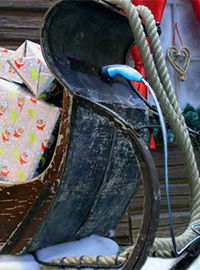 NORTH POLE – To help offset his carbon footprint, Santa Claus has announced that he has converted his sleigh from reindeer power to electric power.

“Even though I’m up here at the North Pole I still want to do what I can to help with climate change,” said Claus. “But, between you and me, I honestly wouldn’t mind if the place warmed up a little bit. I wouldn’t mind walking around the house in shorts and no shirt on instead of six layers of polar bear fur. But that kind of thinking is selfish and would get me on my own naughty list, ho ho ho. But… I do think about it. Being warm. I think about it a lot.”

Claus says he was inspired to make the change to an electric vehicle after seeing a documentary about the fossil fuel industry and after a particularly difficult night with one of his reindeer.

“There is a lot of downtime up here in the off season and one night I found myself watching a documentary about the fossil fuel industry and it… well, every single person working for gas companies won’t be getting anything in their stockings this year, that’s for sure. It is just awful what’s happening down there! But that’s not the only thing that made me want to switch to electric power. No. I… well let’s just say that Donner can be a real sonofabitch, please excuse my language. I found him after he got in to my ‘special snow,’ humping Comet, and as I tried to separate the two… well let’s just say that Santa got a hoof to the mistletoe. Ho ho ho.”

While the change will make Claus’ trip more energy efficient it will also increase travel time as Claus delivers toys to good girls and boys on Christmas eve around the world.

“While the overall energy usage of the Christmas eve trip will be down and the emissions of methane and CO2 will be way down, it will take longer to make the trip as Claus will have to stop at least 50,920 times to refill the sleighs batteries,” said EV Sleigh Conversion Inc. Engineer, Fabian Conte. “The good thing is that we’ve got the charging time down significantly, because of Elf magic and all, so it’ll only add about two weeks to the journey. At some point in the future, we may end up selling it tech to someone, but we’ll see. I can tell you though it won’t be too that fucking skid mark Elon Musk. Fuck that guy and the reindeer he rode in on.”

According to climate scientists, Claus’ reindeers emitted as much greenhouse gas in a single night as several dozen 747 airplanes.

“Who knew that reindeer made so much methane?” Claus said. “Well, they do so it’s important that I do my part which is why I reached out to EV Sleigh Conversion to make the change to electric. I thought about going with Tesla but… that company is run by that fucking skid mark Elon Musk. Fuck that guy and the reindeer he rode in on. Again, excuse my language. It’s true though.”