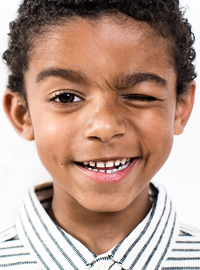 Marcus Weeksy's classmates have declared him to be the "luckiest boy in the world."
Related Topics

COSTA MESA, CA – Classmates have declared local boy the “luckiest boy in the world” for celebrating Christmas, Hanukkah, and Kwanza.

“I go to Gammy’s house for Hanukkah and then we all go to Grandma and Granpa Weeksy for Kwanza and then we have Christmas at home,” said Weeksy. “It’s cool ‘cus I get presents on all of those holidays. And it’s a ton of presents. My family is awesome.”

After hearing about the three different family holiday celebrations, Weeksy’s classmates unanimously declared him “the luckiest boy in the world.”

“(Weeksy) is so lucky!” said Weeky’s classmate, Chloe Dumas. “I wish I got to celebrate all the holidays and got all the presents. Marcus said that sometimes he gets 1,000 presents! He is so lucky. I hate my parents for just being one religion! I hate them so much. Maybe when I grow up, I’ll marry a Jewish man so that my kids can be just as lucky. I guess I should start working on that now.”

For the past month, Weeksy has been telling his fellow classmates about his various family holiday celebrations and the large amount of presents that he gets.

“This year I’ll probably get close to about 2,000 presents I think,” said Weeksy. “I mean, I get a lot of stuff from my grandparents for Kwanza, and a lot of it’s kind of dumb, but I usually do get some cool stuff. Like last year I got a drone! Then there’s Hanukkah where it’s eight days of presents from my other grandparents and most of the stuff is crappy too but they did get me a PlayStation 5 last year. Then there’s the big one – Christmas. My parents get me whatever I want because I’m their only kid and they think that if I’m unhappy that they are failures because that’s what my therapist says.”

“It was cool being the ‘luckiest boy in the world’ for a while but the new kid gets to celebrate Christmas, Kwanza, and Hanukkah? That’s way better than having my stupid parents,” said Klingenon.