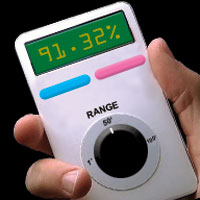 The new Bangulator will help people find love by displaying the chances of a connection on a small LCD screen.
Related Topics

TOKYO, JAPAN – Sony is putting the final touches on a new device which may revolutionize dating all over the world. The small, hand-held device, tentatively called a “Bangulator,” operates similarly as a calculator and can determine the chances of a love connection between two people.

“Basically, this device will allow someone to walk into a room and know right away, who they can take home that night and, you know… do it with them,” said Sony Marketing Leader Tashimo Yakumi. “Say you and I sat here talking. If the Bangulator told me there was no chance that you would, you know, do it with me, then I’d just leave and stop wasting time. But as you can see, this Bangulator says there is a 94 percent chance that I will, you know, do it with you today.”

The Bangulator is no bigger than the iPod mini and has a small display screen. The screen will show the chances of a connection between the owner of the Bangulator and any person the device is pointed at within a 100 feet range.

“When you point the Bangulator at a person and press this button, it will run through a series of tests that will determine your chances with that person,” Yakumi said. “One of the things that the Bangulator reads is atmospheric pressures around the person. It has become a known fact that when someone is interested in you, the atmosphere around them changes. Also, in terms of women, the moisture in the air rises as well, but as of now, we’re not sure why that is. Regardless, the Bangulator measures that as well.”

The implications of such a device are already turning certain groups of people rabid to get their hands on the Bangulator. Nerds, Dorks, Geeks and Losers have already started to line up at Best Buy retail stores across the country.

“Really, as it stands right now, this thing is really only made for guys,” said Mark Weatherby, Sony’s Head of American Marketing. “Women don’t really need this device, because any guy they will want to sleep with, will more than likely sleep with them. Well, except for the ugly chicks. They’ll need this device. And fat girls – they will really need this one. Fat ugly chicks? Well, they really have no hope anyway. All they can hope for is to find one of those freak guys that loves fat chicks. A chubby chaser finder, that’s what they need. But we don’t make that… yet.”

The Bangulator will hit the market with a $150.00 price tag and each store is expected to sell out with the first five hours of the device being available.

“For something like this, there is no limit on what people will pay,” Weatherby said. “Hell, we could have sold the thing for 5,000 dollars and we still would sell out in a few hours. Sure all the dorks that will be buying this thing will have to cut back on their comic books, Cheetoes and Mountain Dew, but as they are chowing down on their first Fur Burger, it’ll all be worth it. You know what I mean by that? Yeah, that’s what the guys down in R and D call vaginas. Fur Burgers. Makes me giggle a little every time I hear it.”

Anticipation for the device has reached a fevered pitch, with only pre-orders have already reached 500,000.

“Man, I cannot wait to get my hands on this thing,” said 26 year old virgin Tony Bullock of New York. “First thing I’m going to do? Take it to Billy’s Comics and Toys to see if that one hot cashier will do me. Then, this summer, I’m going to take it to the San Diego Comic Con to see if I can bag that chick that plays 7 of 9 on ‘Star Trek.’ That’s gonna be hot.”