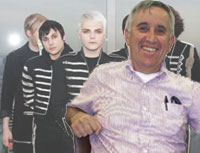 Omaha father Steve Holt hopes the band My Chemical Romance can help him communicate with his son Brenden.
Related Topics

OMAHA, NE – Local father Steve Holt has taken drastic measures to reconnect with his high school son, Brenden, by listening to and trying to appreciate the band My Chemical Romance.

“Thing’s just haven’t been the same with Brenden since his mom left us,” said Steve Holt. “My boy, my lovely little boy is growing up and away from me so I have to do something about that. I went to Best Buy and asked a guy there what kids were listening to these days and he said My Chemical Romance… so I’ve been listening to them a lot to find ways to, you know, connect with my boy.”

My Chemical Romance is a popular rock band from New York. Their latest album, The Black Parade, has sold over one million copies.

Steve Holt is just one in a long line of modern day fathers who are growing apart from their sons, and psychiatrists think that modern technology is responsible.

“In this modern age, there are just too many distractions that drive wedges between sons and fathers,” said Dr. Tobias Cross, staff psychiatrist at the Mayo Clinic in Minneapolis. “Back in the day, kids were bored so they had nothing better to do than hang out with their dads. I mean, in the 50s, TV stunk so kids wanted to go out and play catch. In the 60s and 70s, dads and sons bonded by lighting up a joint because TV sucked. But in the 80s things started to go wrong. Kids finally had good TV, and video games. Next thing you know they have Game Boy’s and iPods and no one wants to throw the old pigskin around with their dad. I tell you it’s a sad world.”

Even though he is aware what his father is up too, Brenden Holt doesn’t think that his fathers plan will work.

“Yeah, I know what he’s doing, but I don’t really care,” Brenden Holt said. “I actually think it’s pretty funny, ‘cus I don’t even like My Chemical Romance. I’m more into rap than that, you know, like Mos Def an’ shit like that. It’ll be a cold day in hell before he listens to rap.”

Whether or not Steve Holt’s plan works, Dr. Cross says that it is still important to try.

“Father’s need to do whatever they can to connect with their sons,” Cross said. “If they don’t the entire world is in trouble. If sons hang out too much with their moms, the man of the future will have sissy feeling and want to talk. But if a son knows that his dad wants him to grow up and be a man, then that boy is off on the right track. Showing an interest, no matter how deluded, in your son will show him that while you’re not afraid of you feelings, they don’t control you like a woman’s emotions do. When a boy sees something like that, that boy will grow up knowing that a man does what a man has to do. And he certainly won’t end up gay. But to that end, I am doing research that listening to too much My Chemical Romance does actually make you gay. So far the proof is there.”