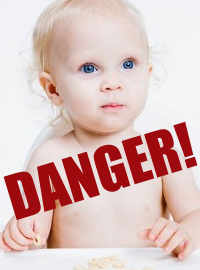 A new documentary shows how dangerous babies can be.
Related Topics

LOS ANGELES, CA – A new documentary highlighting the danger of babies is causing a series of protests and calls for tighter restrictions on owning a baby. The film, “Small Packages of Death”, takes a look at babies and the harm they do those who own them, those that have contact with them, and the harm they do to the environment on a world-wide scale.

“For the most part, people are really ignorant when it comes to how dangerous babies can be,” said the film’s producer, Hank Wynans. “That’s why we made this documentary. I know they look cute and all, but the most deadly things usually are. Did you know that a Koala will rip your face off and rape your eye socket? They will if given half the chance. We are actually gearing up for a documentary on that but, anyway, babies are nightmares wrapped in little blankets. The second you turn your back on them BAM, shit goes South in a hurry.”

According to the film, babies are responsible for killing millions each year and causing up to a billion dollars globally in damaged property.

“Baby saliva can eat through skin. Did you know that?” said New York University pediatrician Samil Raj. “It’s true. Look at these scars. They are from babies. Every time someone brings a baby into my office I recommend they kill it immediately. They never listen. Never listen. Then! Then 50 or so years later, the people with the babies die. Fucking babies. They will kill us all.”

Since the release of the “Small Packages of Death,” concerned citizens have been holding protests outside of state capitals and federal buildings.

“We want the government to take action against babies right now!” said protestor and mother of two Lisa Ripply. “We need to… um, stop people from having babies and stop people from buying babies and we also need to, um, stop babies from being able to eat our souls. We need congress to act on this baby issue right now because we don’t know how much longer this can go on. Actually, you know what we need? We need abortion legal everywhere right now! Yeah! Abortion! Abortion! Abortion!”

“Small Packages of Death” debuted on Netflix last month and has already been viewed more than 10 billion times.

“You know, I always had my concerns about babies but I never realized that things were this bad,” said Wynans. “It’s kinda like the whole Blackfish movie. Yeah, everyone knows that the killer whales are treated like shit, but you don’t know how badly till you see the movie. Babies are the same way. Did you know that babies have caused more deaths in the history of known civilization that any other disease… combined? They have. And yeah, that’s right. I just called babies ‘diseases.’ We just hope people see this documentary and demand changes. Whatever those changes are.”

As the number of views increases, so have calls for new regulations to immediately reduce the number of babies in captivity and to add laws that will make having a baby much more difficult.

“After watching the documentary, I think China might be on the right track limiting how many children people can have,” said Martin Walshson, 41, of Tucson, AZ. “I mean that’s the only thing that (China) is doing right over there, I mean what with all the Panda killing and all, but seriously, if I’d have known that babies were this fucked up, I would have cut my penis off a long time ago. Well maybe not my penis, but definitely my balls. Yeah… they would be long gone by now. I definitely wouldn’t have had three babies of my own. Luckily we got rid of them. I’m not real sure how we did. Things are kinda blurry for me from about 1993 to 2012.”

“Small Packages of Death” was directed by Leanne Freberts who says she put together the film to “shine a spotlight on one of the world’s biggest on-going nightmares.”

“I know it’s my job as a documentary film maker to not take sides on a given issue but fuck babies. Fuck them in their stupid baby faces,” Freberts said. “Well, not literally, because that would be against the law, but metaphorically. Babies are the biggest threat to adults that the world has ever known. Did you know that babies are responsible for more deaths than genocide? I’m not talking about a single instance of genocide, I’m talking about all instances of genocide. Since recorded history has known what genocide is. So that’s why I say fuck babies.”

Like other recent documentaries, viewers have been appalled by what they’ve seen in the film.

“I just can’t believe it, I had no idea,” said Laurel Saunders, 47, from Green Bay, Wisconsin. “I have three kids of my own, if I had know the things they were capable of… gosh, I shudder to think. I’m truly lucky to be alive. Thinking back to all the times that I turned my back on them, gosh, I must have been seconds from death all the time and never even knew it.”