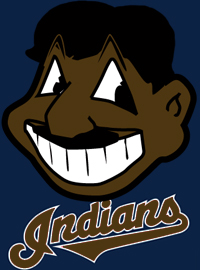 CLEVELAND, OH – Responding to political pressure, the Cleveland Indians baseball team has changed its mascot from a Native American to a man from India.

“We want to be respectful to the Native American people but at the same time we want to retain the history of this storied franchise,” said Cleveland Indians Owner Paul Dolan during the unveiling ceremony. “So instead of a mascot featuring the likeness of a Native America, we have one that features the likeness of a friendly man from India. So let me introduce you to Kavi! He’ll represent our proud city, our team and he’ll also fix our internet servers.”

Variations of the mascot will feature Kavi wearing a telephone headset and badge that reads “IT Systems Consultant” and Kavi wearing a convenience store uniform.

“Now I know a lot of people might think that it’s offensive to have Kavi dressed up as certain stereotypes, but really, who’s going to complain?” said Timothy Cattaran, President of Baseball Operations for the Cleveland Indians. “Indians, the ones from India, they don’t care about these things. It’s white people that get angry about it. Indians don’t give a shit. They know that a lot of them are in the IT field. Hell, they embrace. You have to be smart to be an IT person. And yeah, the convenience store stereotype is a little outdated but we still need to appeal to the common man and a lot of common men only interact with an Indian man on TV or as a store clerk. So yeah, we don’t care. When these new Indians start complaining, then we’ll do something, but till then, we’re going to milk this of everything we can.”

“First and foremost I want to get it out there that we have no problem with changing the mascot, but the team name itself is a little more tricky,” said Cattaran. “The team itself has been around since 1914, so we have a lot of history there. Back then you could get away with a lot more offensive team names. I mean in 1921 the Indians played an exhibition game against the Brooklyn Guidos. If you ask me, that’s a much more offensive name than the Indians, but that’s just me. Anyway, it would have cost us billions of dollars to change the team name, so we compromised and I think just about everyone is happy with the change. Even Guidos.”

The Cleveland Indians organization went through a lengthy design process before settling on the final design for Kavi.

“It was hard, because we wanted to capture the essence of what exactly is important to immigrants from India and Indian Americans,” said graphic designer Wade Reeding. “At the same time, we didn’t want to be too racist. Now of course we wanted to be a little racist, because if there’s one thing we know, it’s that there are a lot of racist people in the US and they like their types stereos, if you know what I mean. So yeah, it took us a little bit to figure out how far over the racist line we could go, and frankly, I’m pretty happy about where we landed.”

The Cleveland Indians are one of several professional sports teams that have come under fire in recent years for mascots or team names that not racially or culturally correct. Thus far Native American leaders have been supportive of the mascot redesign.

“We appreciate that the Indians acted on our years of protests,” said Thomas Yazzie, an official with the Navajo Nation. “If only we could get the (Atlanta) Braves and (Washington) Redskins to follow suit, we’ll be happy. Even if they don’t, I think we’ll be fine. We have been exploring the possibility with the National Football League and the current owners of buying the Arizona Cardinals. If we do end up purchasing the team, we’re going to threaten to name the team the Arizona White Racist Asshole Redneck Fucks, just to see if the other teams have a sudden change of heart.”

While Native America communities are praising the mascot redesign, many longtime Indians’ fans are upset that the mascot has been changed.

“This is bullshit, man,” said lifelong Indians fan Zeke Matthis. “First they make the n-word taboo to say and now they change Chief Wahoo to some computer nerd from India? Fuck that noise. What’s next, changing the Miami Dolphins to the Miami Lesbians? This political correct shit is shit. I’m gonna go sit in my truck, put on some country music and drink some Budweiser while I think about how much I love America.”