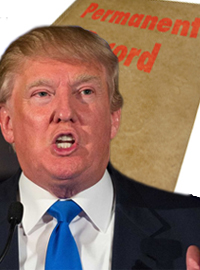 Despite pressure from Democrats, Trump is refusing to release his elementary school permanent record.
Related Topics

“It doesn’t matter what’s in or not in that permanent record but I can assure you that it’s spectacular. It’s the best permanent record that’s ever existed. Everyone who has seen it thinks so,” said Trump. “But I don’t need to release it. It’s great. That’s all you need to know about it.”

Saying that it’s “none of your business” Trump has kept his permanent school record sealed in his private, solid gold vault located 2,000 feet below Trump Tower in Manhattan.

“It’s really none of your business, my permanent record. It’s mine. It’s not yours. It’s great. You can know that but I’m not going to give it to you,” said Trump. “If I did you’d say that it was great. Everyone says that. It will make America Great again. We’ll get those walls up. Great walls. The best American walls. And then… we… America! I’m great and America and stop terrorists and keep illegals out. I think that about covers it.”

“Really, if (Trump) is being this reclusive about it you know there’s some really scary stuff on it,” said JD Pewster, aide to Hillary Clinton. “I’m not talking about stupid shit like talking in class. I bet there’s shit like getting caught sacrificing a baby goat on there. Or something like that. I’m not sure, but I do think (Trump) is right when he says it’s spectacular. I bet it’s spectacularly fucked up.”

Media outlets, including The Scoop News, have filed several requests with the Trump campaign to have the public records released. Each request has been responded to with the Trump campaign’s standard information request refusal letter – a letter informing the requester that they should go fuck themselves and included a picture of a middle finger.

“Trump is fucking great man. He’s what this country fuckin’ needs man,” said Trump’s Colorado Campaign Manager Eric Richards. “But who gives a shit about Trump’s permanent record anyways? That shit is dumb. And it’s 100 years old so who fuckin’ cares? I care about fucking immigrants comin’ in here and blowin’ us up and taking our jobs and our women. Oh and, that bitch Hillary should be thrown in jail for her, you know, emails. Lock her up! Trump rules!”

Trump has addresses the requests to see his permanent record in recent speeches, maintaining that he will not release them.

“Cracked Hillary, wait, I mean Caged Hillary. Wait. What is the nickname I gave her? Creamy Hillary? No. It’s starts with a ‘c’ I know that. I’ll think of it later, but Hillary is behind these requests,” said Trump at a recent campaign stop in Arizona. “She thinks I’ve got secrets. I don’t have any… crooked! That’s it. I call her Crooked Hillary!’ See, I told you I knew it. I know everything. I’m great. Once I shit out a gold brick and I used that gold brick to by a yacht and then I sank that yacht because I could. America!”