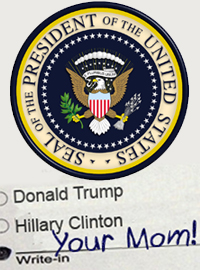 WASHINGTON, D.C. – With only a few weeks until the Presidential election, the write-in candidate Your Mom has taken the lead in a series of recent polls.

“People are rejecting the two major party candidates at a rate we’ve never seen and because of that people are looking for other choices,” said former Democratic Party Chairman, Howard Dean. “Someone, who knows who, said that they’d just write ‘Your Mom’ on their ballot and people are really starting to agree with that. People just seem to want Your Mom now. They really want Your Mom. They definitely want Your Mom more than they want (Clinton) or Trump.”

A recent national poll conducted by the Associated Press, shows Your Mom with a 2% lead over Democrat nominee Hillary Clinton and Republican nominee Donald Trump. The poll showsYour Mom with 32% of the vote, Clinton with 30%, and Trump with 28% among likely voters. Another write-in candidate, Dees Nutz, came in fourth place with just under 1%.

“You Mom is sitting on a pretty comfortable lead right now,” said Associated Press pollster, Gwen Fricker. “Your Mom is popular. I mean Your Mom has always been popular, but nut like this. More popular than ever. And as the poll numbers continue to rise and get… firm, more and more people will line behind Your Mom to get in on the action. They’ll support Your Mom really hard, all night long.”

Your Mom’s popularity has increased over the last several weeks, especially among millennials.

“Word is getting out that people are planning to write-in Your Mom on ballots on Election Day. Kids today, they just love Your Mom,” said political analyst Richard Brenmberton. “The millennials look at Clinton and they just don’t trust her. They look at Trump and they are fucking terrified. But they look at Your Mom and they… they get it. They get Your Mom. They want to be with Your Mom. They want to jump on Your Mom like a train and ride Your Mom like a bucking bronco. Is that the right phrasing? Or is it that they want to pull a train on Your Mom? I don’t know how the kids talk. Regardless, young people are jumping all over Your Mom.”

Your Mom is also leading polls in several key battleground states. In one recent poll conducted by Florida State University You Mom held a higher favorability rating than both Clinton and Trump.

The website fivethirtyeight.com says Your Mom has a 48% chance of winning the election.

“There is obviously still time before the election, but if it were held today, and if everyone that said they’d do Your Mom does Your Mom, there is a decent chance Your Mom would come out on top,” said editor of fivethirtyeight.com, Nate Silver. “I’m not sure I’ll jump on Your Mom with everyone else but… I might. I really might. I like Your Mom.”

Clinton and Trump both have pointed out the fact that Your Mom does not technically exist as a single person and therefore cannot be president but those facts have not resonated with the public at large.

“You all know that ‘Your Mom’ isn’t an actual person, right? Am I the only one that knows that? There isn’t one person that is named Your Mom. So who would actually be president? Unless… I’m a mom. I’m Chelsea’s Mom. So if Chelsea is the ‘Your’ you are all talking too I… you know what? Go vote for either me or ‘Your Mom’. Just don’t vote for that other thing. That dumb racist thing running as a Republican,” said Clinton.

At press time, Your Mom was not available for comment.