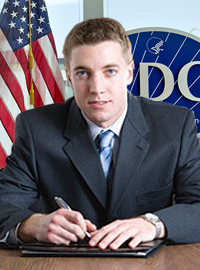 White House Intern, Jordan Fisher will take over as head of the CDC later this month.
Related Topics

WASHINGTON, D.C. – President Trump has installed a new head of his COVID task force – a White House Intern that helped remove a computer virus from the President’s laptop.

“Starting next week I will have a new virus expert leading my GREAT pandamimc (sic) team. AMERICA! Trump is Great!” Trump tweeted after making the decision late last month.

White House Intern, Jordan Fisher, was called in to the Trump’s residential area to assist Trump with a “computer problem.”

“Bro, I was called in to meet (Trump) ‘cus he was having some computer issue and since I’m the youngest person in the White House by, like, 30 years I was asked to take a look at the computer,” said Fisher. “I get there and the thing isn’t even on. I mean, just completely off. So I hit the power button and biggity bam, that shit comes right on. Now I’m seen as some sort of computer genius. Seriously Bro, I have no idea what I’m doing. I can’t even figure out Tik-Tok and there are 12-year-old girls posting some crazy ass shit. But whatever, I’ma ride this train for as long as I can so the girls down that the Pull Bar will definitely want to get with me.”

During a press conference Trump praised Fisher’s knowledge about viruses.

“That Fishing kid, he’s a sharp kid. He knows a lot about viruses,” said Trump. “I got a virus, a really nasty virus on my computer that I use to shop for girls, I got a virus on it and it wasn’t working because of nasty Nancy (Pelosi) and the do nothing Democrats are trying to sabotage me making American great and the wall and did you know that computers can get viruses? I did of course. Everyone always tells me that I should make the best computers because I know so much about computers. Witch hunt!”

Many GOP senators support the Trump’s decision saying Fisher has proved to be knowledgeable in viruses.

“(Fisher) checks all the boxes for a leadership role in this administration – he’s white and he is a ‘he’, so yeah, the kid has it all,” said Senator Tom Cotton, (R-AR). “I can really see this kid going places. This week he’s head of the pandemic response, next week? Who knows? As long as he keeps his mouth shut, this kid might even end up on the ticket as the Vice President. We all know the (Mike Pence) is kinda on the outs, so, yeah, I wouldn’t be surprised. Nothing surprises me anymore. I wish I was dead… like my soul.”

At least some in Trump’s inner circle are not pleased with Fisher’s appointment to the CDC.

“Trump is a dumb, dumb, dumb, I mean seriously dumb person but this COVID thing is not making us look good at all,’ said Secretary of Health and Human Services, Alex Azar. “People are really getting upset that everyone they know is dying and then (Trump) appoints some dumb kid as head of the CDC? The least (Trump) could have done would be to put in an actual doctor that will do exactly what we say. This kid just stands there smiling at the camera and shouting ‘yup yup’ every ten minutes.”

Despite the fact that most appointees made by Trump don’t last more than a few months, Fisher is happy with his new role with the administration.

“Bro, this is totally going to be sick,” said Fisher. “And I don’t mean sick like people with Corona. No, the only Corona round here is gonna be that case of brews that my boy Skinny Mike is going to be bringing over. And the Prez told me that he was totally gonna hook me up with some ‘Putin-tang,’ whatever that means. So that’ll be cool.”