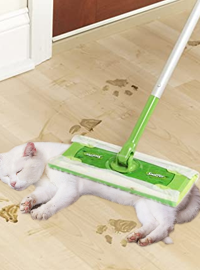 The new Swiffer PetSweeper will use pets to clean and mop dirty floors.
Related Topics

CINCINNATI, OH – Procter & Gamble has released a new version of the Swiffer Sweeper that attaches to small animals and will allow customers to use their pets to clean floors.

“The new Swiffer PetSweeper makes cleaning your house fun for both you and your pet,” said Swiffer Product Manager, Sarah Goldstein. “The Swiffer PetSweeper handle has a harness at one end that you can put on your pet and then use your pet as a broom or even as a mop. Really, it’s that simple.”

Procter & Gamble engineers had the idea for the new Swiffer PetSweeper product line after observing their own pets just sitting there doing nothing.

“I looked over at my cat just sitting there. Just sitting on its ass not doing a god damn thing, ever, and I said to it ‘get a fucking job!’ and it just stared back at me,” said Lead Product Designer, Leonora Rainer. “And pet food is expensive, you know? So I was sitting there thinking that it’s about time that pets help out around the house. It’s literally the least the little bastards could do. Then, as if on cue, my asshole cat knocked over a glass of water. As I was cleaning and cursing my cat, I kind just went over there and put the Swiffer on (the cat) and then kinda just dragged the cat around the floor with the Swiffer. And you know what? It kinda worked. The floor was clean. And my cat didn’t even meow so I’m assuming that she didn’t hate it.”

“Any animal that you can drag around the house will work with the Swiffer PetSweeper,” said Rainer. “I haven’t tried a ferret, because ew, no. Have you ever seen a ferret in real life? They’re like if a snake and a rat had some nasty-ass interspecies sex and created an unholy abomination. I’m talking like, really dirty sex. Like, I don’t know, bondage and torture and stuff. But anyways, most animals would probably work in the PetSweeper. It’s really versatile.”

The Swiffer PetSweeper was developed as part of Procter & Gamble’s initiative to be more environmentally conscious.

“Lately, the products that we’ve been creating have had a more green focused,” said Procter & Gamble Manager of Engineering, Kyle Horback. “We are placing a string emphasis on reducing waste. In some cases that means meeting multiple needs. Like an air fryer that also is a toaster over. Stuff like that. So when we were thinking about this product, we tried to figure out how we could reduce waste. Everyone has a lazy ass pet, so why not ditch the cleaning wipes and put those pets to work? That’s when the inspiration hit.”

The animal rights organization People for the Ethical Treatment of Animals (PETA) released a statement indicating that the organization does not have any concerns with the Swiffer PetSweeper but a full review of the product is ongoing.

“As of right now, we think it’s an ok product because the animals are not being harmed,” stated PETA in the release. “But we are PETA, so you know we’re assholes that don’t really have a firm stance on things, so maybe next week we’ll decide that this is cruel. Who knows?”