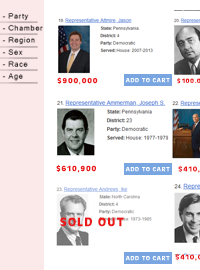 The Congress.gov website still has several politicians that are available to be purchased.
Related Topics

TOLEDO, OH – The winner of the recent Mega Millions lottery jackpot said she plans to purchase her very own politician with the winnings.

“We all think about what we’d do if we won the lotto, right?” said Mega Millions winner, Brea Rosson. “Heck, I spent most of my workday just sitting behind the desk at the auto center daydreamin’ about buyin’ all sorts of things. Like the other day, before the Lotto drawing, I went through and put $17,000 dollars’ worth of stuff in my Amazon cart, you know, just all the stuff I really wanna buy. But you know what I really want now that I’m rich? I want what all those other really rich people got. I want my very own personal politician.”

Politicians have become a popular purchase for the wealthy. According to Forbes Magazine, some of the richest people in the world have collections of 50 to 60 American politicians.

“In a sense, it’s kind of like collecting baseball cards back in the day,” said Political Analyst Peter Greeven. “When we were kids, everyone collected cards and they would trade them. That’s pretty much how things go now in terms of politics. One billionaire will go to another billionaire and say ‘hey, I’ll trade you my Ted Cruz for your Louie Gohmert.’ And the other billionare will say ‘Hell no! Cruz is a fucktard that I wouldn’t trade for him even if I had ten Rand Pauls.’ And the bartering goes back and forth till a deal gets made. Just like when we were kids.”

“It’s kinda like having a puppet but way better. Remember when we were kids and we all wanted puppets and then we got that puppet and went home and realized making a puppet do things is hard and takes a lot of work, so we gave up and never played with that stupid puppet again?” said tech billionaire, Russell Whener. “Well owning a politician is like having a puppet for lazy people. I can just text Rick Scott down there in Florida and tell him to say that climate change is the work of alien socialists from Glabozord8 and he’ll do it. It’s so great. Also, I get tax breaks on literally everything.”

Rosson said she isn’t sure how much a politician will cost but hopes she won’t get stuck with a “cheap politician no one else wants.”

“I know politicians are super popular right now but hopefully there are some good ones left. I haven’t looked yet though. I kinda don’t want to until that lottery money hits my bank account, you know? I guess I kinda don’t want to jinx things,” said Rosson. “My Grams always told me not to count the… well, she used to say a racist thing, but I’ll just say that I don’t want to count my chickens before they hatch because the coyotes eat some of them. And snakes. Snakes eat them too. I once saw a snake try to eat a baby pig. It was weird because it was downtown Toledo and right in the middle of Main Street. I just kept thinking to myself how the hell did that snake get that pig in damned downtown Toledo? I don’t get it, but I’ll be damned if I didn’t sit there and watch it for about an hour and a half.”

According to the United States Congress online store, there are few politicians that are still available.

“There are a handful left, yeah,” said Congress.gov customer service representative, Kyle Reppim. “None of the Republicans are left. Those go really, really fast when the new ones come in. Sometimes they are bought before they even come in. But there are a handful of democrats. Like, that one lady from Colorado. No, not the stupid one, the normal one. Diana Degette. Yeah, she’s still available because no one knows who the fuck she is.”

Rosson said she is still having a hard time believing she actually won the lottery.

“Oh my gosh! I still can’t believe I won!” said Rosson. “You dream about this but… I never thought it’d happen to me. I’m muthfuckin’ rich! Take that Neal. He’s my ex. Shouldn’t have cheated on me with Lisa. But once I get my politician, I do kinda hope I have enough left over for an above ground pool. So, when Neal drives by he can see me in it and think about how he should have stayed with me because Lisa don’t have no pool.”