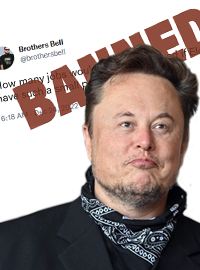 SAN FRANCISCO, CA – After months of increasing hate speech on the platform, Twitter has announced it will begin blocking hate speech directed at rich people.

“Twitter will not tolerate any hate speech, of any kind, directed at rich people,” said Twitter Chief Executive Office, Elon Musk. “We will continue to allow hate speech directed towards any… not rich people because of ‘free speech’ or whatever, but we will not, under any circumstances allows a single hateful tweet that is directed at someone who is rich. It is just not OK and will never be OK as long as I am in charge… and rich.”

After taking ownership of the company, Musk said Twitter would no longer block content regardless of if the content contained hate speech. That decision has been reversed after a sharp increase in hate speech directed at Musk and other rich people.

“Elon (Musk) came in and immediately fired the entire policy and legal teams that were responsible for making sure people don’t say racist or equally horrible things on Twitter,” said former Twitter Content Manager, Gabriel Lasdikinnon. “But then people started tweeting about him and he hired a whole new policy and legal team to review tweets about rich people. So now you can say the most vile, racist, misogynistic thing you want as long as it’s not about a rich person.”

“Elon was very, very persistent that the update to the definition of hate speech must include references to his small… I mean, a rich person’s small penis,” said Twitter Senior Business analyst, Micha Ribboi. “(Musk) totally doesn’t have a small penis, why would you even say that? No, (Musk) is just very concerned because he has a small, I mean he has a friend with a small penis. And this friend, who is totally not Musk, is worried that ever since he bought Twitter, that people will know just how small his penis really is.”

According to Musk, the update to the hate speech policy was necessary to protect the rich people from harm.

“No one cares if you poor people get attacked either physically or online but we all care when rich people get attacked. Rich people are this world’s greatest resources,” said Musk. “Also, I have a very large penis. Would a person with a small penis get upset that things were being said about them online and then joke about buying the place the people were saying bad things about them and then get forced to buy the place and then pretend like that’s what I really wanted and then lie about all sorts of stuff and then try to distract people with crazy stuff while I run the place in to the ground because I don’t know what I’m doing and I’m still just mad because people said mean things about me? No, a rich person with a small penis wouldn’t do that. I mean… Did you know the old Twitter people were working with the Deep State?”