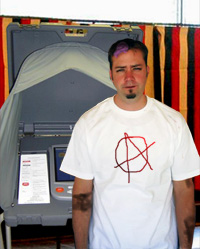 Jerold "Skinner" Watoski exits a voting booth after writing the name of the rock band Good Charlotte on his ballot.
Related Topics

PORTLAND, OR – In a demonstration against the American government and the election process, 18-year-old Jerold “Skinner” Watoski, decided not vote for any of the available Presidential candidates and instead wrote in his own candidate. Watoski, who describes himself as an “Anarchist,” wrote the name of rock-group Good Charlotte on his ballot with a marker that Watoski had snuck into the voting booth.

“Yo, man, fuck both those guys. Neither of them are really looking out for the people,” said Watoski. “They just care about getting money and power – just like in the Good Charlotte song ‘Lifestyles of the Rich and Famous.’ We need a President that cares about rockin’ out and punkin’ the government and scoring some beer and getting tattoos and breakin’ stuff and not giving a shit about anything but the here and now. Not some guy that’s going to send us to a war for oil or some old dude that… that… talks about healthcare all the time.”

After casting his vote, Watoski scribbled his nickname on the voting podium along with the phrase “Down with the Proletariat!” Watoski’s friends expressed little surprise upon hearing the news of his choice for President.

“That fuckin’ guy is the biggest poser on Earth” said Watoski’s friend Karl Drenner. “Here’s a little fact that most don’t know about that dumbshit – he was a huge fuckin’ band geek just last year. He had the glasses and everything. You know what else? Guess where he went for his 17th birthday. A fucking Jessica Simpson concert. Sure, he says that he went with his sister, but the tickets were his birthday present. And when he got them, he screamed like a woman. Now he thinks he is some bad ass anarchist but what self respecting punk anarchist listens to Good Charlotte?”

The band Good Charlotte consists of five members and it is unclear if Watoski meant to vote for the entire band or just one member. Under the current constitution, only one person can serve as President of the United States at a time.

“If (Good Charlotte) had our choice, I think it would have to be Benji,” said Good Charlotte singer Joel Madden. “And I’m not just saying that ‘cus he’s my brother. He kicks so much ass it isn’t even funny. His guitar licks, they’re better than Jimmy Fucking Hendrix. Listen. Listen to ‘The Anthem,’ it’s fucking sick! That and he’s named after a dog. You know, that little mutt that’s always getting into trouble? Man, I love those movies. Almost as much as I love my brother… dare to dream. If only the rest of the U.S. had the same views on brother-brother love as Hawaii.”

According to the U.S. Senate Elections Commission, if Good Charlotte would have won, the results would be catastrophic.

“I think that it will become utter chaos,” said polling expert Paul Doughty. “I know that you can’t really write in a candidate, but still, chaos. We would have to listen to the voice of the people, and god help us if that voice screams for Good Charlotte. Can you imagine what a hell that would be? We would have to hear that shitty bands shitty music all the time. Even more than we hear it now. I would kill myself. No, I would kill my wife and my daughter first. I wouldn’t want them to suffer. Then I would kill myself. And you know what? I wouldn’t be the only one.”