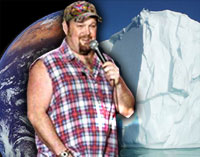 HOLLYWOOD, CA – With Global Warming becoming the hot topic among television and radio talk show hosts, celebrities have begun using their massive political influence and scientific expertise to help protect and revive aspects of the environment.

One celebrity in particular that has been working diligently to save the Earth is actor and comedian Daniel Whitney, better known as Larry the Cable Guy.

“A lot of people think that because I’m a racist, ignorant, sexist, Republican, sometimes religious comedian from the South that I don’t care about what happens to this planet. Well those guys are wrong,” said Whitney. “We have to save the Earth because we live here and we haven’t made the moon ready to move into yet. I know my fans will probably turn on me for coming out like this, but let’s face it, anyone that thinks I’m funny is at least mildly retarded if not totally retarded.”

Last month, Whitney met with President Bush and later a Senate subcommittee to detail some of his ideas to reduce greenhouse gases.

“The meeting with Bush went… well, it could have gone better but I think he really listened to what I had to say because of my work in the scientific field,” said Whitney. “What I told him was my plan. By harvesting human cells, we could tap a power source more abundant and efficient than coal. If we took all the old, and all the poor of this country, ground them up, and used this new fuel source, greenhouse gases would be reduced by half within the year. I think Bush was skeptical at first but he really locked on the use of poor people as fuel.”

According to Whitney, human beings are an excellent source of power because of the things that we put into our bodies every day.

“Now I’m no doctor, hell, I’m barely even a comedian, but if there’s one thing I know, it’s science,” Whitney said. “See, I took a science class in the 7th grade, and we learned all about how things work. Now, like my audience, I could be considered ‘mentally retarded’ as well, but I know that with all the preservatives that are in our foods these days, things stay in our bodies. Things that can burn more efficiently and cleanly than any other substance. Of course I didn’t come up with that plan by myself, ‘cus like I said, I’m mentally retarded, but someone who’s really smart told me all about it.”

After the meeting with Whitney, President Bush was very excited about the possibilities that Whitney presented.

“Now I know that there is no such thing as Global Warming, it’s just a ploy by them Devil-crats to scare the American people,” Bush said. “But what I hear from this cable fella is that we can get rid of all the poor people. I’m all in flavor of that. If there is one thing that I hate, besides big words and minorities, it’s poor people. If I could get away with saying there were weapons of mass destruction in the poor areas, I would in a second. But I can’t do that, so this is the next best option.”

While President Bush is having his team of scientists look into the feasibility of Whitney’s proposal, many real scientists are coming out against the plan.

“Come on, this is just plain stupid, even for this administration,” said Oliver Everett, a Professor of Science at Harvard. “Global warming is a real threat that shouldn’t be taken this lightly. I mean Al Gore is all over this thing, he’s really passionate about it. When was the last time you saw Gore passionate about anything? He’s a rock with no emotion, and if he’s finally showing some real, honest emotion, you know this is serious. Grinding up poor people is just about as stupid as Whiney’s so called ‘comedy.’ It’s just asinine. Bush and Whitney should have a competition to see which one is in fact more retarded. I think it would distract them both long enough for them to interfere anymore with us normal people finding a real solution to, well, to everything.”