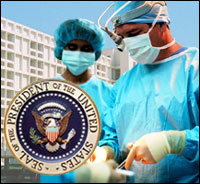 WASHINGTON, D.C. – President Barack Obama’s administration has released details on its proposal for overhauling the U.S. health care system. The plan, which would give nearly 90% of American’s free health care, is centered around reducing the number of Americans via free abortions and free assisted suicides.

“I know those whack-job conservatives get all up-in-arms about killing babies and old people, but really, if we are going to have free health care, there needs to be a lot less people,” said Democratic Senator, Ron Wyden of Oregon. “We can reduce the number of people pretty easily on both ends of the lifecycle. We reduce the number of babies born every year and we increase the number of people dying every year. That way, we only have to worry about ourselves… and really, isn’t that the American way?

In addition to free abortions and assisted suicides, Obama’s plan would also allow any patient see any doctor for any reason.

“One of the biggest issues with the current health care system is that most people are limited in the physicians they can visit based on their insurance coverage,” said White House Press Secretary, Robert Gibbs. “Our new plan will allow any person to see any doctor at any time – regardless of specialty, regardless of patient load and regardless of price. If I want to see a surgeon for my cold… then I’ll have that flexibility. Can I, for whatever reason, go to a proctologist to get my tonsils removed? Yes I can. Yes we can.”

A number of high ranking Republicans have come out against the plan saying that it not only socializes health care, but also because it encourages the killing of babies and old people.

“The last thing American’s need is socialized health care,” said Republican Senator, Orin Hatch of Utah. “Look at Canada. Or England. Or Ireland. Or France. Or Germany. Or Sweden. Or Brazil. Or Japan. We don’t want to be like any of them and because… they… um… all have to schedule appointments way out… days even. How can we live like that? We really don’t want to be like Canada where every citizen, whether they’re poor or middle class has access to health care do we? I don’t. To me, that sounds like what Hitler was trying to do. Oh… and there is the killing old people and babies thing. That is also bad.”

Despite the resistance from most of the Republican Party, an overwhelming majority of Americans support the plan.

A Scoop News survey found that 83% of Americans support universal health care even if it includes free abortions and euthanizations.

“Really, there are just too many people around these days,” said Linda Dunn from Baltimore, MD. “I’m all in favor of getting rid of some of the old people. They’re going to die soon anyway, why don’t we just nudge them along? What’s dying a few years earlier really going to do? I say nothing. Plus, and I know I’m going to sound like a stand up comic, but they’re horrible drivers. So in essence, we’re actually saving lives by killing old people. As far as the babies go… fuck ‘em. Name me a single baby that has ever done anything worthwhile. You can’t, can you? And if they take doctor time away from me, which they will because they always get sick, then the less of them the better.”