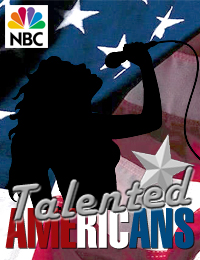 "Talented Americans" is just one of the new shows debuting this season.
Related Topics

HOLLYWOOD, CA – With Fall settling over North America, television networks have begun rolling out their Fall lineups, offering new shows and reboots of past shows.

“This year is a little bit different in that we actually don’t have a single ‘new’ show really. We only have shows that we are rebooting because they worked in the past or shows that are total rip-offs of other successful shows that are currently on the air,” said NBC Public Relations agent, Gabe Hirschfield.

The Scoop spoke with several network executives and has gathered information on a couple of the new shows.

“Remember Us Celebrities, Please!” (ABC)
“Celebrity shows always work. Always” said ABC director of Programming Sarah Berens. “For this show we just gathered up a bunch of washed up celebs and just put them in a room and film while they try to force people to remember them and do crazy shit in order to keep people talking about them. The best part is that we don’t have to have a big budget for this because they all work for the potential of more work. Or crack.”

“The Singing Dance Show” (CBS)
According to CBS Chairman of Programming Michael Wilcox, this show takes the best elements of “Dancing with the Stars” and “The Voice,” and mashes them together in an all new way.

“Never before have contestants had to sing and dance,” said Wilcox. “How crazy is that? They have to sing and dance. No one in the history of ever has had to do those things at the same time. It’ll be a train wreck and the public will love it.”

“Talented Americans” (NBC)
“This new show will be similar to the shows ‘America’s Got Talent’ and ‘American Idol,’ but will be different and unique at the same time,” said Hirschfield. “Normal, everyday citizens get up in front of the country and perform what they consider their best talent. And then a panel of celebrity judges will score and explain why the contestants are terrible. Family fun.”

“America Goes Dancing and Singing” (ABC)
Taking a page from the CBS playbook, ABC will be unveiling their own singing and dancing show. For the ABC version, performers will have only one minute to impress the judges before being dropped though a trap door on the stage. Producers are keeping where the trap door goes a secret but promise that “Americans will be totally fucking surprised.”

“The Dance and/or Singing Voice” (Fox)
“I’m not going to lie. This show is just exactly like all the other shows. We are considering blasting the contestants with paintball as they try to get through their routines but we’ll see,” said FOX Programming Spokesman Reinhold Mertz. “We might even let audience members shoot the paintballs. Again, still too early to tell how this will shake out but by adding paintball to the competition we capture the very important demographic of dumbshit Americans who really like seeing people shot in the genitals – or as the demographic is more commonly referred to – Kansas.”

“Pauley Shore’s Variety Show” (NBC)
“This show is going to be totally killer, buuuuuudy,” said Pauley Shore. “Oh god, I’m doing it. I’m actually doing it. Somebody please shoot me. I’m 50-years-old, I really shouldn’t be rehashing my old bits trying to win over a new generation. Please stop me now. This is not going to end well.”

“A Group of People” (CBS)
“This is our only show that isn’t singing or dancing. This one is a sitcom,” said Wilcox. “This show will feature five friends that all hang out together all the time and have silly little things happen to them all the time. And they will all date each other and break up with each other. Oh and to mix things up, one of the main characters is a Satan worshiper.”

“The Real Hunger Games” (FOX)
“We are really excited about this one,” said Mertz. “While not exactly like the book – because we don’t want to get sued – this show will pit people from third world countries fighting each other to the death. The winner will get one million dollars in food for their village or town or whatever it is that those people have. Of course we want Americans to watch so the violence will be high and we will, of course, find only the most attractive poor people to participate. No uggos.”

“Thinly Veiled Excuse to Show Tits” (Cinemax)
“This show doesn’t even have a script or a concept. We just find an unused set, put some hot chicks and dudes on it and them film it while they get naked and rub against each other,” said Marv Freeman, head of Cinemax. “We aren’t gonna waist anyone’s time with stories or scripts. We are Cinemax and we know what guys want.”

“Mobster Drama #4223” (HBO)
“Mob dramas are hot but not current mob dramas – we’re talking about like 40s era mob dramas,” said HBO Vice President of Programming, Regina Greyle. “This show will be classy, sexy and cool. People will watch it because it is on HBO and because it looks neat.”