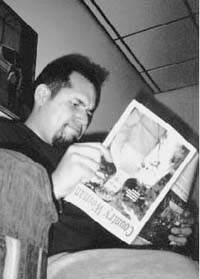 HARRISBURG, PA – A study, conducted by University of Virginia professor Alan Lamansky, has concluded that Gary Valderito of Harrisburg, Pennsylvania is indeed “stupid” under the rules and standards governed by the scientific method. The study, funded by a grant from the Society of Talented and Gifted Elitists of America, contained scientific validation, and numerous accounts of stupidity and idiocy as cited by friends, co-workers and neighbors.

For years, those closest to him have always suspected Valderito was an idiot, but they lacked the scientific proof necessary for an accurate label. Neighbor, Manny Cordero, noted a specific instance this past summer when he observed Valderito mowing the lawn using a child’s bubble-mower toy and his underwear on the outside of his jeans with pink leg warmers.

“I seen him out there in his yard and the dumbass had his underpants on over the outside of his Jordache jeans. Not only that, but they was all inside out too. I sat there all wonderin’ like and I says to my wife, ‘Hey, Ethel!, Take a look at this boy here. That there is one dumb shit. ‘ I mean, we all thought the boy was retarded or somethin’ cause normal people just don’t do that sorta thing ya know?”

“By that time, I had demoted Gary down to lettuce-washer, because he couldn’t really grasp the whole dishwashing job. I swear, I’ve seen retarded monkeys that are smarter than this kid. But he’s still good people. Anyways, that dumb sonofabitch piles about 300 heads of lettuce into the back of his El Camino and zips on over to the Spit Shine car wash next door. I’ll tell you what, there is somethin’ seriously wrong with that boy. His mama musta dropped him on his head repeatedly when he was a baby,” Rolle said. “I’d really hate to think that is natural… him bein’ that dumb. It just ain’t right.”

Along with these specific instances, Professor Lamansky has included results from over 23 separate scientific studies.

“I have aptitude and intelligence quotient assessments, as well as the basic, ‘put the correct wooden block through the correct hole test,’” Lamansky said. “This is pretty rudimentary stuff here, I used toys that are meant for children for most of the tests. Watching this man stumble through these tests was just really depressing. If Darwin was right this guy should have never made it past the age of 4.”

When asked how Valderito fared in these tests, Professor Lamansky just shook his head.

“We tried to get him to put the correct block into the correct hole and he just kept hitting himself in the head with the square block, and he eventually knocked himself unconscious. Next we tried the written IQ test, but Gary seemed to be baffled by the pencil, so we skipped that one altogether,” Lamansky said.

When asked his opinion of the test results, Gary Valderito snarled, “I don’t care what yer fancy tests say. I are not stupid. I’m smart. S-M-R-T smart.”