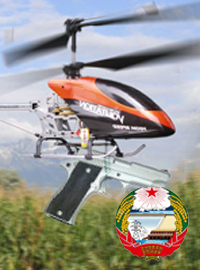 North Korea released the blurry image above of a drone used by the North Korea Military.
Related Topics

SEOUL, SOUTH KOREA – As tensions between North Korea and South Korea continue to build, North Korea has released details and images of its new drone fleet.

Based on the images released by the North Korea Military, the drones appear to be small helicopters, like those typically sold as toys for children, with guns attached to them by string or duct tape.

“The thing is that the guns that are attached are just normal looking hand guns,” said Foreign Policy advisor to the White House, Martin Murdoch. “Look at this one. See, it looks like a Baretta pistol. A gun that just about anyone can buy at a gun shop or Wal-Mart. The thing that we can’t figure out is how the guns are fired. I mean one would assume that there is some sort of remote device, but for the life of us, we can’t figure it out. It must be incredibly small, almost microscopic. Also, I’m not sure those little helicopters can actually lift a gun but the images don’t lie.”

According to the North Korean military, each drone is capable of “killing of 100 million trillion people and Americans with fashion the font mounted guns of projectile motion inside.”

“It so powerful, you will tremble before the might of the mighty Fearless Leader,” said North Korea Press Minister, Kao Nong Jiu. “Drones are super mighty power with long guns that kill many people. No one can stop the Glorious Leader. He smart and very sexy. All women will cream panties at the sight of magistic and super tall handom leader.”

North Korea did not release the range of the new drones nor did it release how high the drones can fly.

“We no tell everything,” Jiu said. “You think Supreme Sex Leader is dumb? He know how to make many baby with women. He very verily. Long penis. He say that drones can not reach the end of his happy dong. But they come close. That how far they go.”

South Korean military units stationed along the demilitarized zone have not seen a North Korean drone either visually or on radar.

“Near as we can tell, the drones have not been flown near the border between the two countries,” Murdoch said. “There is a chance that they have a super advanced cloaking device attached to the drones. That would explain why we can’t see them on the reader. Either that or they are full of shit and this technology is just a ploy to make us think that they have far more advanced weaponry than they do. But I’m going to go out on a limb and say that these things are totally legit. We should be totally scared.”

According to the United States of America Secretary of Defense Ashton Carter, the U.S. military high command is “not concerned” about the North Korean drone units.

“There is an embargo on AA batteries to North Korea. And as my nephew knows, you can’t fly one of those little helicopters without batteries,” said Carter. “So no, I’m not worried about the North Korea drones.”