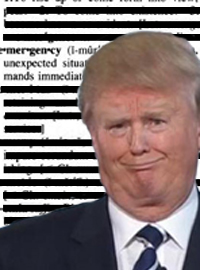 Because he doesn't understand most of them, Donald Trump will sign an Executive Order to reduce the number of words in the English Language.
Related Topics

WASHINGTON, DC – One of Donald Trump’s first actions as President of the United States was sign an Executive Order reducing the total number of words in the English language to 150.

“Trump is a dumb, dumb person and as such he does not know very many words,” said White House Press Secretary, Sean Spicer. “To make sure he understands things that are said to him, he is removing all the words that he doesn’t know or understand. The problem is, that’s almost all the words because he is a dumb person. But I stand by him 100%. Or as I will need to say once this Executive Action is in place, me with Donald because he good and smart.”

The plan to reduce the number of words was immediately criticized but Spicer defended the order by saying “Americans want a President that speaks to them and not to snobby smarty pants liberal elites that know what ‘intelligent’ means.”

Although not discussed while campaigning for President, those close to Trump say reducing the number of English words has been one of Trump’s highest priorities.

“Because he is a dumb, dumb man, (Trump) has spent a large portion of his life not understanding what was being said to him,” said Counselor to the President, Kellyanne Conway. “He told me very early on that if he was elected, he was going to ‘redo English’ so he could understand it. We’ll see how that goes but I wouldn’t be surprised if he ends up reducing the number of allowed words even further. I highly doubt he actually knows 150 different words. Really, I can think of about 40, 50 tops, and most of those are slang fur ‘vagina’.”

In the Executive Order, the 150 remaining words in the English language were not identified but Trump told those attending the signing ceremony that he word “get a list of words, smart words, all the smart words I know and some other ones too, the best words, all good words, I like words, I’m smart. See this pen? I used it like a big boy. Like a smart big boy who is in charge.”

Trump, who is widely considered to be a dumb person, if not the dumbest person, signed the order by rubbing a pen with the cap still on it, across the printed copy of the Executive Order.

Despite many prominent Republicans applauding Trump for his bold move, many Democrats believe that the move will quickly backfire.

“Here’s the thing, to convert any sort of disputing the only word that we’ll be allowed is ‘sad.’ That’s it,” said Chuck Schumer, (D-New York). “You can’t use a word like ‘devastated’ or ‘appalled.’ Only ‘ sad.’ To put it bluntly, that’s fucking sad.”

According to sources, the list of acceptable word will be released at the beginning of March.