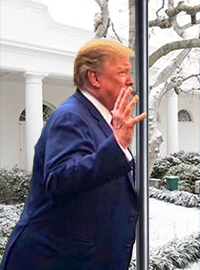 President Donald Trump required assistance after he stuck his tongue to a frozen metal pole in the White House rose garden.
Related Topics

WASHINGTON, D.C. – President Donald Trump required assistance this week after getting his tongue stuck to a metal pole in the White House rose garden.

“The President, for unknown reasons, decided to lick a metal pole in the rose garden and… well, as you can imagine, his tongue got stuck,” said White House Staffer, Wilton Watson. “Once we realized what had happened we immediately dispatched a crew of medical professionals, chemists, and weathermen to safely remove the President’s tongue from the pole.”

It’s believed the President’s tongue was stuck to the pole for less than five minutes.

“At this point we all know that we can’t really take our eyes off (Trump) for more than a couple minutes because he’ll destroy something or hurt himself,” said Watson. “That said, I think we were able to catch (Trump) with his tongue stuck to the pole pretty quickly. I mean, it’s very rare that he’s out of sight for more than a few minutes, and I’ll admit, we kinda dropped the ball today. But still, he couldn’t have been stuck there for more than a few minutes. Five tops.”

Since the incident, acting White House Chief of Staff, Mick Mulvaney, has ordered that all metal poles be removed from the White House grounds.

“As I’ve mentioned every single day since I took this job, Trump is a profoundly stupid man. A very, very dumb, dumb person,” said Mulvaney. “I mean, babies are considered dumb because they don’t know anything yet. Most babies are smarter than (Trump). Because (Trump) will likely go right back out there and lick another pole, we’ve been working to remove them. As tempted as I am to just let him freeze out there… that won’t help our agenda. That agenda of course being to make ourselves crazy rich while also making America white again. And yes, we are all racist. We’re as racist as (Trump) is dumb. Just thought I’d add that bit in case there were people out there who might still be confused about it.”

When asked why he had stuck his tongue to the pole, Trump said he was proving to Nancy Pelosi that he is the smart.

“Old Nancy (Pelosi), that’s what I call her, because she is old, said that smart people would be smart enough to go outside and lick a metal pole because they knew that it’s cold out and the wind, you know wind? It’s something that doesn’t really exist. Did you know that? Wind is something made up by the whacky left. They are using it to scare Americans in to wanting healthcare. I saw a bird yesterday. I saw it before everyone else. I’m the best at seeing things before other people. Some people… a lot of people, they always say ‘geez Mr. Trump you sure are good at seeing things.’ I always tell people that the Dems are the ones that are actually the ones that are stealing your money and that want to put all Americans in cages. Wind. What even is that? I… wind… woosh. Pbbbbt. Witch hunt! No collusion! I… Hillary!” said Trump.

Nancy Pelosi has not made any public statements about “licking a metal pole” and she suggests any memory Trump has about such a statement likely comes from a dream or television.

“I never said anything about sticking your tongue to a metal pole,” said Pelosi. “Wasn’t there a movie where a kid gets his tongue stuck to a metal pole? I’m sure that’s where Trump got the idea and he’s just too embarrassed to admit that he is a fucking idiot so he made up this story. But you know what? It doesn’t matter what I say because his supporters won’t believe a single word I say so whatever. Actually… I take it back. Everyone that is smart like Trump probably isn’t smart enough to stick their tongues to frozen metal poles. And if they were somehow able to do that, it sure would own us libs.”

White House medical staff said that Trump suffered no ill effects from having his tongue stuck to the pole but acknowledged that he was lucky he was discovered so quickly.

“If (Trump) hadn’t been found as quickly as he was there is a good chance that some permanent damage may have occurred to the President’s tongue and of course if he was out there for an extended amount of time he may have suffered frostbite because he wasn’t wearing a coat or any winter clothing,” said White House Medical officer, Glenn Hamstel. “I haven’t really seen a person get his tongue stuck to a pole since I was… probably five so I wasn’t quite sure what the damage would be but yeah, (Trump) was lucky he was found so quickly. It’s cold out there.”