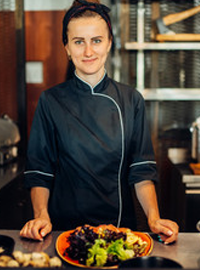 On Netflix's new "I'd Fuck It" chefs will compete to create dishes that judges would consider fucking.
Related Topics

“We are pleased to announce the newest addition of ‘I’d Fuck It’ to our catalog of great cooking competition shows,” said Netflix Head of Programming, Henry Cherrywill. “We have taken great pride in the response some of our other shows have received, but as always, we feel that there is room for more great cooking show competition content. And while we all love our other shows like ‘Nailed It!’ and ‘Is It Cake?’ we are excited about this new show and can’t wait to see what dishes the judges are willing to fuck.”

According to show’s producers, “I’d Fuck it” will feature chefs from around the country competing against each other to make dishes so appealing, both visually and in taste, that the judges would consider having sex with the dish.

“The thing about this show is that everyone has that line that they are willing to cross when it comes to food and sex,” said “I’d Fuck It” Executive Producer, Danielle Higgens. “What we’re going to try to do with this show is push that line and have food so amazing that our judges say ‘Wow, I want to stick my dick in those mashed potatoes.’ That’s the level we’re going for here. We want our contestants to make something so amazing that grown ass adults will not be able to control their genitals.”

Producers have lined up two award winning chefs, Preston Hawkins and Chastity Wert, as well as celebrity Gabriel Iglesias to act as the show’s judges.

“Food, and good food in particular, trigger a carnal need in all creatures,” said Hawkins. “I can honestly say that I’ve had some food in my life that I would totally make sweet, sweet, passionate love to over several hours. The Carnaroli Risotto Biologico from the French Laundry? I’d let that dish slap me and spit in my mouth. Momofuku’s Ginger Scallion Noodles? I’d rawdog that bowl every night. I’m not even going to get into what goes through my head when I find a Taco Bell that still serves Chili Cheese Burritos. Let’s just say that those boldly go where no burrito has gone before. It’s just, damn… you all got me a hot and bothered now just thinking about it.”

“Look, we are running out of ideas and honestly we pitched this as a joke and Netflix greenlit it so… now we have three judges debating which dish they put their genitals in or on,” said “I’d Fuck It” Producer Austin Perry. “What’s funny is that while this was a huge joke at first, some of these people are totally serious when it comes to fucking food. In fact, one of the judges won’t stop talking about getting pegged by a Taco Bell burrito. They bring it up every day.”

“I’d Fuck It” is currently filming its first season with target premiere date in February.