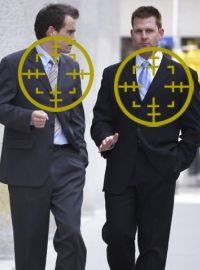 The National Association of Police Organizations (NAPO) is recommending that police officers begin to shoot more white people in order to reduce the tension between police officers and minorities.
Related Topics

MEMPHIS, TN – As tensions between police officers and civilians rise across the country, the National Association of Police Organizations (NAPO) is recommending that police officers begin shooting more white people.

Several incidents where black men were killed by white police officers have started a national conversation about the fairness in police practices, laws, and enforcement.

“Police treat us, black men, differently than they treat white men. Period,” said Yale Law Professor, Malcom Dreeson. “If I walk in to a room with a police man there is an 89% chance I will get arrested and a 78% chance I will get shot. If a white man walks into a room with a police man the two will high-five and then start talking about how the should arrest or shoot me. Those are probably facts. The only white people who are shot and killed by police officers are… actually there are no white people shot and killed by police officers. Even school shooters aren’t killed by police officers. But one thing is for damned sure and that’s that white people need to stop talking about me behind my back. I bet when you leave this room you are going to talk about me behind my back. Aren’t you?”

While suggesting police officers shoot more white people, NAPO is not telling its members to refrain from shooting minorities.

“Right now (police officers) aren’t doing anything wrong. Instead of examining our attitudes and behaviors we need to just shoot a couple more white people a year – just to keep those bleeding heart liberals and minorities out of our business,” said Witchita Police Department Captain, Dean Simmonds. “We need to face facts here, minorities are still the ones committing most of the crimes, probably, so we still need to handle them as we always have regardless if they have actually commited any crimes. And then every once in awhile we just shoot a white guy to even things out. Like, for every five black guys that we shoot, we should try to shoot one white guy. But for the love of god, we need to be carefull that we don’t kill (white people). You know, just wing them so they know we mean business.”

While many in minority communities approve the idea of police shooting more white people, few think it will have an impact on communities relationships with police officers.

“While I like the idea of shooting of as many white folk as (police officers) can, I don’t think that’ll help much,” said Clarence Wright, 78, of Memphis. “Everyone know the truth – that police are scared of darker skins. Blacks, Mexicans, Arabs, a white guys with a really dark tan. Any of ‘em. If a police officer sees any folk walking down the street the dark one is gonna get shot up. That’s the truth! Now I don’t like it much, but what are you going to do? Me? I’m just going to sit here and wait for the day when it’s my turn to get shot up.”

“Look, I don’t want to give anything away here but the, um… ‘agreement’ that um… some of us, uh… lighter skinned people have with each other… um, states that we cannot… shoot each other… because of… um… you know, I’ve already said too much. The High Priest will not be happy with me if I say any more,” said white man Earl Plottsy.