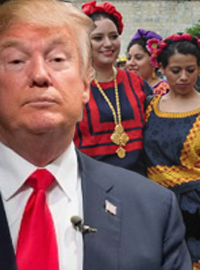 NEW YORK, NY – In an effort to appeal to both women and Hispanic voters, Republican Presidential Nominee, Donald Trump, told a room full of supporters and reporters he would consider marrying “an ok looking Mexican broad.”

“I like broads. And they like me,” said Trump during the campaign stop in Evansville, IN. “I know some women that have said they like me a lot. And those, whatyoucall’em… Mexicans? Yeah, they like me too. I’m huge with them. And I like them too. I like women and Mexicans. In fact, when my current wife gets too old, which, in looking at her will be soon, I’ll probably marry an ok looking Mexican broad for my next (wife). Because I don’t just like the hot women, I like other ones too. And all women love me. I’m popular with all sorts of broads. Even the ugly ones. Like her right over there.”

Trump has struggled to gain support from both women and Hispanic voters.

Political commentators say Trump’s comments are clearly meant to make him relatable to women and Hispanics and some question his sincerity.

“It’s not that I don’t think Trump is lying, I’m just saying that there is no way he would marry just an ‘ok looking Mexican’ chick,” said Matthew Ridgle. “His statements are total bullshit and all he’s trying to do is convince chicks that he actually like them and convince Hispanics that he doesn’t want to ship them all to Mexico. If he married a Mexican chick, you can bet your ass she’d be a 10. Or at least 9.5. And she probably wouldn’t even be Mexican. Brazilian, maybe, but not Mexican.”

A spokesperson for Hispanic Women United said the obvious pandering would not help Trump gain in popularity among women, especially Hispanic women.

“Look, there ain’t no Hispanic woman I know that would give that creepy hair-thing a minute of time,” said Teressa Gonzalez. “First off, he has no mustache. Second, and this is import, he’s rich but he ain’t rich enough. You know what I’m sayin’? And third, he looks like a bloated dead body that has been spray painted to look like it’s still alive. Hispanic women aren’t in to that. Unless he is really, really, really rich. And don’t be saying that us Hispanic women only care about money. All women care about money. It’s not just Hispanics.”

When asked about his sincerity and if he would commit to marrying a Hispanic Woman, Trump said “I know people are saying that Obama, you know… we have terrorists and he… people are just talking. Probably in Muslim. I’m not sayin’ it. There are other people out there who are saying it. Also women. Am I right? I mean, people are talking about women… I’m just sayin’ that people are talking. People can make up their own minds. But women, yeah, they are great. I’d like to make out with my own daughter but I can’t… until I’m president. Then I can change the less and do whatever I want.”

Many political pundits have come out in favor of Trumps new views and think the comments will help him gain in the polls.

“This is probably the greatest move any politician has ever made,” said radio host Sean Hannity. “I mean it’s genius. Admitting that he would marry something that he had been very vocal about hating? It’s unheard of. It would be like Hitler marrying a Jew. Or Pol Pot marrying a Cambodian. Of the Grand Dragon of the Klu Klux Klan marrying one of those negroes. You’re never going to see those things happen, and I’ll be honest, I never, never expected it to come out of Trumps mouth. He’s a genius and I wish I was a Mexican lady and that Trump would marry me. God damn how I wish that.”