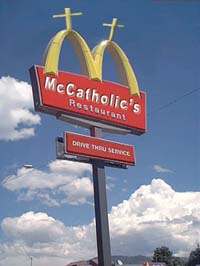 Artist's rendition of the new McCatholic's sign to adorn the front of every McCatholic's location.
Related Topics

STERLING, VA – During a closed meeting in Vatican City last week it was decided that the Catholic Church, which has recently been facing both monetary and moral trouble, will be sold in full to the worldwide fast food chain McDonald’s. Both the Pope and Edgar Steves, McDonald’s spokesman were pleased with the new venture and expressed optimism for the sweeping changes to both the religious and fast food worlds that this merger will bring forth.

“We won’t change everything right away. We know that customers don’t adapt well to rapid changes so we plan to take things as slow as we need to. But by the end of the year look for McDonald’s and Catholic to be synonymous. In fact, by then each will simply be referred to McCatholic,” said Steves.

One of the biggest changes customers will see is a change to the familiar golden arches. By this summer the golden arches will be replaced with two golden crosses resting on an “M” shaped mountain. In another broad change, the Pope will have his title renamed to Ronald McPope and will wear a bright red wig and face paint. Steves says that the change to the Pope is necessary to make the organization appear more kid friendly and family oriented.

“Right now the Pope just kinda sits there and creeps everyone out. Well, that will end soon. In July we will replace the current Pope, assuming the old guy lives that long, with a Catholic Cardinal which best exemplifies customer satisfaction, great taste and really strong spirituality,” said Steves. “And we figure that if he looks like our old mascot, Ronald McDonald, kids, especially young boys, will trust him. Seriously, when was the last time Ronald molested a boy? Never, that’s when. Molestation is something we all really want to get away from and that alone may be the biggest change for most in the Catholic faith.”

To go along with the other changes, McDonalds plans to combine everything in the Catholic world with that of the McDonald’s world. Communion wafers will become bite sized McNuggets and will be known as McSacrament. In addition, the familiar wine representing the blood of Jesus Christ will be replaced by an orange flavored beverage.

“At first I was really taken back by the things that were going on and the announcement of all the changes. But now I really think this is a good thing for both the Catholics of this world and consumers. The drive through confessional is a great idea. But I’m still not quiet sure what the Hamburgler has to do with Baptisms. Oh well, I guess time will tell,” said Father Jerry Nazarov.

Catholics across the world have expressed excitement and anticipation after hearing of the new union. Many are reportedly happy to finally have a Faith that works with their general attitudes towards life and culture.

“This is great. McDonald’s and Catholicism joining forces is perfect for those who want to worship but don’t really have the time,” said Catholic Ginger Ray Cherry. “Also, McDonald’s plan for globalization fits in right along with the Catholic Church’s attitude. Especially when it comes to competition. This will be good. But I am kind of curious as to why they have decided to install a third bathroom in every McDonald’s for ‘dirty little boys.’”

EDITOR’S NOTE: Both God and Jesus Christ have not responded to this new union and were unavailable at press time. Satan on the other hand is said to be very pleased, but he’s evil and the Scoop refuses to acknowledge evil. Except for Christina Aguleria ‘cus them titties aint evil.