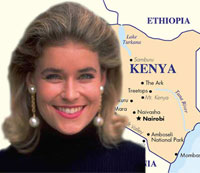 Stephanie Jackman's relationship with her friend's nanny has given her insight into the current crisis in Kenya.
Related Topics

CLEVELAND, OH – A local woman has told her co-workers that she understands, better than anyone else she knows, the current crisis in Kenya because her friend’s nanny is from South Africa.

“I see this woman, my friend’s nanny from South Africa, every couple of weeks and each time I see her, I’m just reminded of the tragedy and struggle that she must be facing with all the violence and terror going on right now in Africa,” said Stephanie Jackman. “I mean, it’s just terrible what’s happening in Kenya and that other country… over there.”

Kenya has erupted in tribal violence after the contentious election of President Mwai Kibaki.

“Even though she doesn’t talk about it, I know that she hurts inside,” said Jackman. “So I read this Newsweek story about it and it… it really hit home you know. Because I know someone from that country. Is South Africa far from Kenya? Well, even if it is, it’s still the same Africa. Do you know what I mean? They are all family, just like us here in the U.S. of A.”

Although Jackman has been open with her sympathies for the people of Kenya, many of her co-workers are sick of hearing about it.

“You know, I think she might actually be retarded,” said Bruce McDonald. “She just isn’t right, you know? All she talks about is what’s going on in Kenya. We’re in a meeting talking about forecasts, she brings up Kenya. We’re at lunch celebrating Cathy’s birthday, (Jackman) depresses the shit out of everyone by bringing up Kenya. I think she’s trying to impress people by being all political, but man, she just sounds retarded. The worst thing about all this? I totally wanted to do her before she started with this shit. Now I only want to stick my penis in her mouth so she shuts up. There would be no pleasure in it.”

Jackman is aware that her co-workers doubt her sincerity and she attributes that doubt to racism.

“They can think anything they want, but as long as people are suffering in, um, Kenpa, I will sympathize with them,” Jackman said. “People. Are. Dying! I think. Are they dying? Well I’m sure they are. Or are they hungry? I don’t remember that article anymore ‘cus I got sooooo drunk the other night. It was really cool because I totally made out with my friend Jenny and it totally made these guys all hot for us. Then we ditched them. That was a great night. But the guys in the office that think I don’t care about the poor people in Africa are racist. Because there are black people in Africa and I care about them and Danny from Sales Support is racist because he doesn’t.”

Jackman’s friend’s nanny Abigail Di’Jubi says she is happy that Jackman has taken such an interest in African politics but worries that she may be getting her facts confused.

“Ms. Jackman asks me all the time about Africa but I don’t know what to tell her,” said Di’Jubi. “I only know of South Africa and not much of the other countries. I do know that some terrible things have happened in Kenya but she is wrong that the violence comes from Darfurians. I’m not sure there is such a thing as Darfurians. I think she must be confusing the trouble in Darfur with the trouble in Kenya. But she is a nice lady.”

While Jackman remains concerned about the situation in Kenya, she is reluctant to do anything to help or aid those in need.

“I don’t really want to give any money, because… I don’t have a lot… and there is this cute purse but that’s not the point,” said Jackman. “It’s not what you give but how much you tell people about what’s going on. Knowledge is the power. Not money. Anyone can give money. But by letting the world know what’s going on over there in the city of Kenya, that’s what will change the world. The more people that know about it, the more people will want to do something about it.”