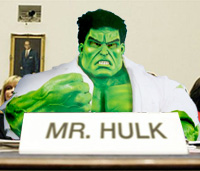 The Hulk appears before the Congressional panel on steroids and human growth hormone.
Related Topics

WASHINGTON, DC – Several of the nation’s most recognizable superheroes, including Superman, Batman, The Hulk and Captain America, have been called before a congressional panel investigating the use of steroids and human growth hormone in the superhero community.

Steroids allegations against the superhero community came to light late last year after Robin, Batman’s protégé, was arrested after allegedly trying to buy illegal steroids from an online pharmacy.

“When we brought Robin in, we knew that this was just the tip of the iceberg. Something bigger was happening and things just weren’t right,” said Jason McHale, the Drug Enforcement Agency Agent who led the team investigating online pharmacies and the illegal import of banned substances. “We received an anonymous tip about Robin and after the sting, after going to pick him up, we saw how angry he was, it was like he was mad about something. Really mad. Like he was, I don’t know, raging. It took several DEA officers to bring him down and that’s when most of us realized that he was juicing. Of course, I knew all along that that kid was no good. Wearing that costume. Red, green and yellow? Those short shorts? That’s not right.”

The congressional panel, led by Pennsylvania Senator Bob Casey, asked several of the superheroes directly if they had ever used illegal steroids or human growth hormone.

“It’s just a shame, a sad, tragic shame,” Casey said. “I mean we look up to these people, and this is what they do to us? They shit all over our hopes and dreams? They have super powers, why do they even need steroids? Sure steroids make you cool, and make your body look like it is chiseled from stone, which women really like, but steroids can’t compare to having actual super powers. If I were on steroids, I would look amazing and I’d have any woman in the world without having to pay for them, but I’m not on steroids, and our superheroes shouldn’t be either.”

Although none of the superheroes admitted to using illegal steroids, many of their power’s origins were called into question.

“They are not making it easy on themselves. Do they really expect us to believe that Captain America, if that is his real name, took a ‘Super Soldier Serum’ and that’s how he ended up with that magnificent body and super strength and agility? In my humble opinion, ‘Super Soldier Serum’ is just the 1940’s term for steroids,” Casey said. “And don’t get me started on The Hulk. Those weren’t Gamma rays. More like human growth hormone rays. And by rays I mean needles. I’ve seen what Gamma rays do to a person and they do not turn a person green and give them a fantastically beautiful body that looks like it was designed by the hand of God. No. Gamma rays turn you into a bubbling pinkish blob of tumors and liquid. And I dare you to find me a better poster boy for ‘roid rage’ than The Hulk.”

While most superheroes have been in favor of testifying, with several even looking forward to telling their side of the story, some are a bit more hesitant.

“To be honest, this is complete bullshit. Pardon my French,” said The Thing, member of the super group the Fantastic Four. “I got my strength from cosmic rays. Cosmic. Rays. Everyone knows that. So why should I have to go and sit in front of a bunch of suits and tell them I’ve never taken steroids? So I took them in the 50s, but back then it was ok. Everyone did it. They were like candy. Sweet, sweet candy that made all the ladies cream their panties. Those were the days. Anyways, just because some little punk gets busted trying to buy ‘roids doesn’t mean we’re all on them. I mean, look at Speedy. When the Green Arrow caught him shooting heroin into his ball sack, did Congress think that all heroes were on smack? Yes, but that’s not the point. At least then (Congress) didn’t call all kinds of hearings to prove their point. And between you and me – if I were to start looking for steroids in our community, I’d look at Aquaman. If anyone should do steroids, it’s that guy. His power is that he can talk to fish. That’s lame. He should do steroids because he is lame.”

According to many on the Congressional panel, the purpose of the hearings is not to conduct a “witch hunt” but to give the heroes a chance to set the record straight and tell the American public their side of the story.

Senator Casey on the other hand says that it is up to the superheroes to prove to the country that they are clean.

“We just want to let (the superheroes) tell us their side of the story,” Casey said. “If their not taking steroids, great. Of course we won’t believe them, but that’s not the point. Come on, we all know that every single hero is juicing. That’s slang for taking steroids, if you didn’t know. Anyway, everyone knows, or should know that this is going on and that it needs to be stopped. Knowing that half of all the high school football players in the country are riding the magical pony, another slang, that makes you better than the next guy, you’re living in a fantasy world if you think the heroes aren’t doing the same thing. A magical world full of leprechauns, unicorns and disease free hookers. Unfortunately, that world just doesn’t exist.”