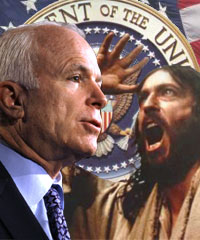 SEDONA, AZ – Only a few weeks after rejecting the endorsement of two controversial preachers, John McCain has announced that he has rejected yet another endorsement from a religious leader. In a public statement, McCain has denounced any connection to Jesus Christ.

“In times like these, we don’t need the help of religious zealots like (Christ),” McCain said. “When I rejected both (John) Hagee and (Rod) Parsley, I thought that I had made it clear that I would not accept endorsements from religious leaders who might hurt my chance of becoming President. I was wrong. (Christ) can publicly acknowledge me all he wants, but I want the general public to know that while I may side with him on his overall beliefs, I in no way, shape or form agree with the way he’s presented himself in recent months.”

Over the last few months, Christ has come under fire for his involvement, or more accurately his lack of involvement, in several major disasters around the globe. These include Earthquakes in China and Iceland, a devastating cyclone in Myanmar, wild fires in Florida as well as tornadoes in the Midwest.

“The fact that (Christ) did nothing during these trying times, despite constant prayers, shows a lot about his true character,” McCain said. “Now I realize that all the blame shouldn’t be lumped on his shoulders, his father didn’t really do anything either. But Jesus is the face of the franchise. He should have been in China pulling people out of the rubble or lifting heavy pieces of debris with his super Jesus strength or putting out fires with his Ice Breath. That’s what he should have done. But while people were dying where was he? Probably hanging out with his damned hippy friends.”

In addition to complaints about his inaction, Christ is also facing heat due to comments he’s made directly and comments being made on his behalf.

“All the comments that all the ‘radical’ preachers have been saying over the last couple months can all, really, be attributed to Christ himself. After all, (the controversial preachers) all say they speak directly for Christ,” said McCain Campaign representative John Picar. “People keep saying that he hates gays so they shouldn’t be allowed to get married and he’s even come out and said that Christianity is the only true religion and that all the others will take you right to hell. That and have you read his book? The Bible? There’s some seriously crazy things in there. He actually claims that the world was created by his dad and that he can come back to life. The further McCain is fro Christ the better. That guy is nuts. Not McCain… Jesus. Jesus is nuts.”

Although Christ has not addressed any of the recent controversy directly and has not spoken to the media, Christ did release a statement.

“You know what? (McCain) can go fuck himself for all I care,” Christ stated. “I’m sorry for using such strong language, but who does this guy think he is? When has it ever been said that I need to be some kind of superhero? I’m supposed to be spreading peace and love, not pulling people who don’t even believe I exist, out of collapsed buildings. I threw my support behind (McCain) because I like the cut of his jib. I like the whole anti-gay thing and the give all the rich people all the money thing. But now, now I’m not so sure. I think Barack Obama is looking like a pretty good candidate now. Screw McCain. He’s going to die soon anyway. No, that is not a threat. I’m just saying that he is really, really old. Old People have ‘accidents’. That’s all I’m saying.”

Democratic presumptive nominee Barack Obama has not made any statements regarding Christ.

“If Obama knows what’s good for him, he’ll stay away from Christ and go with Mohammed,” said Picar. “Mohammed is a lot less of a wild card than Christ. Because Christ is nuts. Did I mention that? Sorry. I just think it bears repeating. Christ is nuts.”