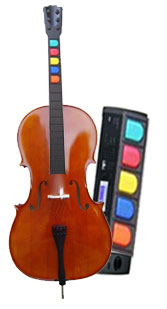 Indie Rock Band will come with a cello and keyboard (pictured) as well as other instruments.
Related Topics

SEATTLE, WA – With the enormous success of the video game Rock Band, MTV Games has announced plans to extend the video game line with the addition of at least two news games scheduled to release this year. The first game to hit shelves will be called Indie Rock Band, followed by the release of Jam Band in the Fall.

“We are really excited about these new games,” said Eric Wilson, president of MTV Games. “(Indie Rock Band and Jam Band) will allow us to reach out to new fans and exploit them out of even more money while systematically ruining the music industry as we know it. With that money, we can do things. Evil, horrible things. But that’s beside the point. With these new games we can reach out to two groups that might not play our games. Sensitive, indie kids and hippies are not big gamers but if they can recreate their favorite songs using a cheap plastic controller, then we think we can hook them forever.”

“A lot of the so called ‘indie” bands out there have taken a different approach to their music and have incorporated many different sounds in their music,” Wilson said. “Personally, I don’t like it. To me, if it isn’t Limp Bizkit, it isn’t music. But that’s beside the point. These new bands will offer a lot of different game play options that we just couldn’t do in Rock Band. One of the features that I’m most proud of is the ratings system. In Rock Band, the amount of applause has a hand in determining how high your score is. In Indie Rock Band, you’re judged on how many fat teenage girls you can make cry. It’s really a great system.”

Several bands have already agreed to include their music in the game. The Arcade Fire, Final Fantasy, Beirut, Mogwai, The Decemberists, Sigur Rós and DeVotchKa have all agreed to participate.

In addition to the new instruments, Indie Rock Band will come with suit coats, glasses, beards and an overwhelming sense of intellectual superiority.

“When we were first approached to do this thing, we were really against it,” said Arcade Fire singer Win Butler. “But then they just threw a bunch of money at us, so we just kind of agreed to do it. I mean, it was a lot of money. I know that some of our fans may think that we’ve sold out. But seriously, it was a lot of money.”

In the Fall, Just in time for Christmas, MTV Games will release the third game in the series titled Jam Band. Jam Band will utilize the existing instruments but will only come with three songs. Those three songs however will total four and a half hours of playing time.

“Jam Bad is just going to be something special,” Wilson said. “The best thing about it? We only had to pay the rights to three songs. That was hella cheap. Even if we only sell three copies of the thing, we will make more money than we invested. We didn’t even have to pay the three bands in cash. We just gave them some munchies and brightly colored lights.”

“The accessories to both these new games make the playing experience much more encompassing,” said MTV Games developer Darrell Ng. “Without the beard and glasses you really can’t get into the feel of playing in an indie-rock band. The same goes for the bong… I mean water pipe. You can’t stand to listen to jam band music unless you… have used a water pipe, recently. You know what I’m saying? We are just trying to make a really great playing experience.”

Indie Rock band will go on sale in May and will retail starting at $500.