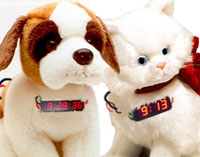 To prove their commitment to peace, the Taliban has distributed puppies and kittens to all Pakistani citizens.
Related Topics

ISLAMABAD, Pakistan – After suffering several military defeats in recent weeks, the Taliban is calling for a return to peace talks and to prove its willingness to comply with any new cease fire, Taliban officials have distributed puppies and kittens to every household within the capital city.

“(The Taliban) want peace and we want to give people of Pakistan peace. We are tired of fighting and we can be trusted to peace. Little dogs symbolize peace in our culture, so we offer little dogs to Islamabad,” said a Taliban spokesman via video clip posted on a Taliban website. “The Taliban is for the people and for peace. So take these little dogs as gift and put them in your home next to you at all times. Take them with you to market or wok. Especially if you are a government person or military of some sort.”

The puppies and kittens, according to a Taliban source, come with all the appropriate vaccinations so there is no need to take them to a veterinarian.

“These dogs and cats are perfect. Just put them in your house and keep them next to you at all times. Especially if you are a government person or military of some sort,” said the Taliban spokesman. “These animals will be perfect pets. They will not eat or sleep or make mess that you will clean up. They will not make any barking. Take them with you everywhere you go, especially next Friday.”

While most citizens have responded positively, there is a growing number of citizens concerned that the puppies and kittens may not be what they appear to be.

“Why does my dog make a tick-tock type sound? That is not a sound a dog makes, dogs say ‘woof’” said Ahmed Zafrul Haq. “My neighbor, he tries to cook dog and finds nothing but wires and… and plastic, and mud. No meat. Nothing to eat except electronics and mud. This is not dog.”

To investigate the animals and possibility that there may be another Taliban agenda, a Pakistani scientist has received one of the puppies and is examining it.

“At first I thought it was a normal puppy but I may be wrong,” said Kal Noor, Pakistani scientist. “The more I look at this, the more I begin to think this is actually a stuffed animal full of electronics and a time clock. But I will need to study it a bit more. It could be a new breed of puppy that has never been seen before.”

While American leaders are applauding the Taliban’s recent show of good faith, some high ranking members of the government are still wary of their intentions.

“Something about this whole situation just doesn’t seem right,” said Secretary of State Hillary Clinton. “Sure, everyone likes to get a free puppy, but the Taliban has never been known to do anything like this, and I don’t buy it that they’re ‘trying to turn over a new leaf.’ There is something fishy going on. But really, until I get my hands on one of those cute little critters, I guess I’ll just have to support (the Taliban) in their efforts.”

According to Taliban officials, if the puppies and kittens prove successful, there are several thousand more ready to be sent to Israel.