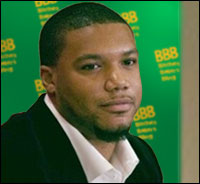 Tiggs and his team, Bitches, Ballers and Bling of the ESPN Fantasy Football League are currently in last place.

“I don’t know what ta say,” said Turner. “I did what I do and I know I, um, let a lot of people down and I, uh, know I let coach Tiggs down and I know I cost him a coupla wins. But I’m goin’ out there every game and givin’ it everything I gots, ya know? Sometimes shit just doesn’t go tha way you wants it ta go. I just run. That’s what I gets paid ta do. I run so I’m gonna keep runnin’ an’ shit. You know what I’m sayin’?”

Tiggs says that he while is disappointed in Turner but blames himself for the recent losses.

“I knew that god damned guy was no good,” said Tiggs. “I picked him up because he had a decent year and ESPN had his rating really high coming into this season. But after two shitty weeks I should have benched his ass and gone with Steve Slayton. At least that guy doesn’t fumble the god damned ball once a game. But you know, I could also really use a better Tight End. Owen Daniels is shit but I blew my wad early in the draft to pick up Tom Brady and so I got stuck with a bullshit tight end. At least this week I’m playing the Taint Wranglers. They ain’t got shit for a team.”

Last week in a game against the Pittsburgh Steelers, Turner managed to accumulate only three points.

“I tried, man, I played balls out,” Turner said. “But come on man, how’m I s’spose ta get through tha Steelers’ D? Them guys be brawlers, man. Not to mention that my O line ain’t do shit. Man, I’m sorry and all that, but there aint nuttin’ I can do. I mean I’m gunna try to do better, next week we got the ‘Skins and everyone knows they sucka-ass losers. I swear that I will get at least two touchdowns. You just watch.”

Despite the confidence that Turner has in his abilities, Tiggs is still hesitant about starting the running back.

“I don’t know man, I think I might have just reached my limit with (Turner),” Tiggs said. “I mean I took that chump as one of my first picks but he hasn’t done a thing for my team. I picked up Darren Sproles from the Charges in the 12th round and that guy has picked up three times as many points as Turner. I’m thinking about trading him, but I just don’t know if I can do it. I know that the second I trade his worthless ass he’s going to go out there and have a hell of a year. He’ll do it just to spite me. I don’t know. It’s all just so frustrating.”

Despite the underwhelming results from Turner, Tiggs is still confident that he can salvage his season.

“It’s been rough, but it’s a long season,” Tiggs said. “This week I got the Wranglers and all he’s got is Drew Brees at QB so even if I put Turner in and he shits down his leg again, I should be able to pull out a win. Of course with my luck Turner will have 23 fumbles and erase every point that I get. I’ll be the first person in the history of Fantasy Football to have negative points.”