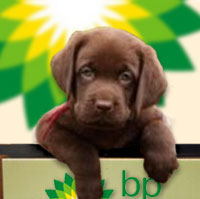 Buttons, a cute Black Labrador puppy, will take over as the CEO of BP.
Related Topics

LONDON, ENGLAND – Faced with a public relations nightmare after an oil rig exploded killing 11 and causing millions of barrels of oil to leak into the Gulf of Mexico, BP has replaced its CEO with Buttons, a Black Labrador puppy.

The move comes only weeks after former CEO Tony Hayward stepped down following the Gulf of Mexico disaster. Hayward was replaced by Bob Dudley, who in turn has been replaced by Buttons.

“When it comes down to it, we just really needed a wholesale change in the way we do things,” said BP CFO, Byron Grote. “With the last few months being so horrible, people have little faith in CEO’s with overinflated senses of self worth and giant pocketbooks. It really hurt Hayward when he took off to go watch a boat race in the middle of disaster. No one wants to hear about that type stuff. They want to see a CEO down on the beach cleaning the oil off of a cute little otter. They don’t want to see some rich, douchebag CEO eating caviar off the ass of a high priced hooker. It’s common sense really. And Bob… he was just a placeholder until we found someone adorable.”

The move to replace the company’s CEO is seen by some Wall Street analysts as purely public relations motivated. ExxonMobil made a similar move in 1989 after the Exxon Valdez oil spill in Alaska, hiring a baby seal to head the ExxonMobil Public Relations department.

“Letting Mr. Whiskers (the seal) come in and take control of the company’s image was quite possibly the best thing that ever happened to our company,” said current ExxonMobil CEO Rex W. Tillerson. “Much like what’s happening with BP right now, we were in a hell of a pickle. Of course while most of our problems stemmed from a drunk captain, we still had a lot to answer to as a company.”

Buttons, who has no relevant work experience, is being cast as the perfect fit for BP as it tries to rebuild customer confidence and regain public trust.

“How could you not buy your gas and oil from this cute little guy,” said Grote, holding Buttons. “The best thing about (Buttons) is that he is so forgiving. If you make a mistake, he realizes that you’re only human and should not be held to the same high standards as he is. Take yesterday for example. Buttons caught me punching a baby in the face. I knew it was wrong and Buttons sat me down and barked at me, angrily for 20 minutes. But after that incident, did he hold it against me? Not at all. In fact, about two minutes after the meeting he was climbing all over me trying to lick my face. And you know what? I let him, because I want to establish that trust. And trust is a two way street. When Buttons poops on the carpet and I have to clean it up, he knows that I’m going to have to rub his nose in it. That’s trust.”

According to BP spokesman Paul Gregerson, Buttons has already made an impact on the company.

“It’s amazing how people’s attitudes have changed toward (BP) in just a few days,” said Gregerson. “Last week we were seen as a soulless company who would like nothing more than to destroy the entire planet. Today, we a soulless company with an adorable CEO. What other company can boast that? Forbes? Screw those old guys. BP is now hip and young and not responsible for destroying the world’s oceans.”

Even though the moves are seen as positive steps, the recent shakeups at the top of BP have had a negative affect on the stock price as shares of BP have fallen sharply with each new CEO taking control.

“We knew that we would take a bit of a hit when we announced Buttons, but we expect that to turn around once people see him out there in the real world,” said Grote. “When people see buttons frolicking in a field of daisies, they’ll forget all about the oil. Then our stock will go up again and I can get back to spending a shit-ton of money on gold toilet paper with the faces of endangered animals printed on it.”

You are very stupid person.