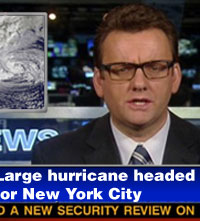 “Breaking in to a story about Obama’s war against Christians is the last thing we wanted to do but there was an enormous storm headed for some of the most densely populated areas of the United States so we made the decision to interrupt the story,” said Fox News Programming Director, Walter Searn. “Granted, Obama’s war on Christians is important, even though we totally made it up, but the hurricane was important too. At least for an hour.”

“Actual, real news is not something we do here and it’s not something our viewers expect to see from us,” said Fox News Vide President of “News,” Jack Everton. “We don’t like to do it, but there are occasions that force us to remove our very conservative opinion and deliver actual, real news. Fortunately those events don’t come along very often. No one likes real, actual news that isn’t editorialized. If they did, they’d probably watch CNN or BBC news or something. But people don’t.”

The actual news caught the Fox News audience off guard and resulted in several emails asking for clarification.

“I so confused at stories on the television box!” said loyal Fox News viewer Denny Gibbs. “I was waitin’ fer the mail so I could get my unemployment check and I was watching Fox News to see what that goddammed Obama was up to now when (Fox News) started jabberin’ about some storm in New Jersey. I got confused and then all angry-like because they was sayin’ stuff about the storm but they weren’t sayin’ nuthin’ about how it was Obama’s fault or how it was the queers getting married causin’ all the wind and rain.”

After several hours of actual news reporting, Fox News was able to use their audiences confusion and questions to refocus their broadcasts to give viewers the information they were seeking.

“Once we started covering the hurricane we received a number of questions that we honestly weren’t prepared for,” said Fox News segment director Richard Threne. “Questions were coming in from all over the place asking things like ‘how did Obama cause the hurricane’ or ‘is this because of gay marriage’ or even ‘what does this have to do with climate change not being real?’ Luckily we were able to take those questions and pass them on to the news team so they could inform people that the hurricane was not caused by global warming but caused by god who is angry at America because Obama said he supports gay marriage. Of course that’s a lie but we didn’t get a single email after we said that.”

With effects of Hurricane Sandy slowly being fixed, Fox News has assured viewers that no real news will appear on the channel for the foreseeable future.