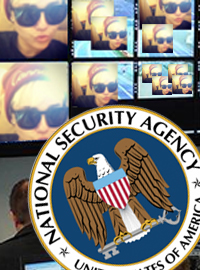 The NSA is no longer able to store data on Americans as all NSA servers are full of selfies.
Related Topics

“As of last week, the NSA is no longer able to collect data due to the very large number of selfies that currently reside on the servers,” said NSA Director, Shawn Nossen. “Apparently young girls like to take hundreds of thousands of pictures of themselves every day. Those hundreds of thousands of pictures multiplied by 365 days and multiplied by the millions of young girls in this country… well, we just don’t have the server space for that kinda of stuff. No one does. Why do (young girls) need so many god damned pictures of themselves making the same dumb face? I don’t get it. I guess I’m just getting old.”

According to NSA data analysts, close-up pictures taken of oneself, referred to as “selfies,” now account for 78% of the data stored on the NSA servers.

“There is one girl in Portland, Oregon that has taken so many selfies that one entire server is dedicated to just her,” said NSA Database Administrator Tim Drake. “I just don’t get it. Every single picture is the same fucking picture. Why the hell does a girl, or anyone for that matter, need to take the same stupid picture of themselves making the same stupid face and send it to their stupid friends 1,000 times a day? I swear to god these kids are all becoming retarded and us adults are just sitting there watching it happen.”

Smart phone apps like Snapchat have helped escalate the number of selfies in recent years.

“The sad thing is that we as adults are just making it easier for young girls to do things like this,” Drake said. “Today, with the proliferation of smart phones, every single person in the entire US has a camera and the internet right in their pocket. Not even 10 years ago, you actually had to make an effort to have a camera with you. I don’t have any pictures from the first 20 years of life, but now every girl in the country has 800,000 pictures of themselves and what they ate for dinner last night.”

“On one hand I like to be safe so I don’t mind that the NSA is reading and storing everyone’s data but on the other hand I am cheating on my husband and I don’t want the NSA to know about that,” said Philadelphia Bartender, Christy Thite. “But what I don’t understand is why the NSA is storing all the selfies. Actually, what I really don’t understand is why all these young girls keep taking the same picture of themselves over and over and sending it to their friends who are taking the same photo over and over. Why do that? I mean, sure, take a couple pictures but come on.”

“Right now we don’t have a good way to determine what is a valuable selfie and what isn’t” said Nossen. “It’s a well-known fact that terrorists take selfies so we still have to go through every selfie taken in America and analyze it for possible threats. It’s hard on our team but it has to be done. It’s just that when you are scrolling through the same dumb girl taking the same dumb picture over and over again… your attention to detail suffers. It’s like that one optical illusion where you stare at the line drawing and when you close your eyes you see the line drawing. Only our team here, when they close their eyes they are seeing young girls. You know, that’s not going to work out for some of these guys.”